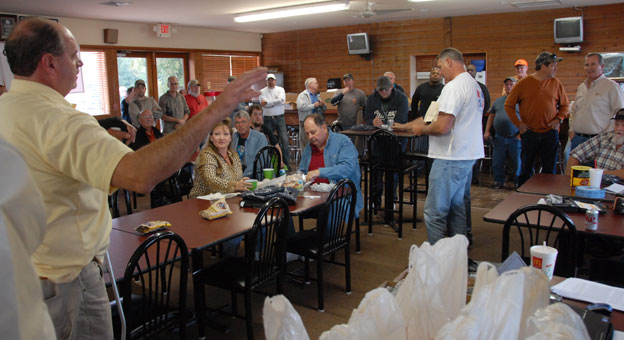 Delegates from across the Volunteer State traveled to Nashville, TN recently for a full weekend of activities at the semi-annual meeting of the Tennessee State Council of Machinists. Despite a current political environment in Tennessee that is decidedly anti-worker and anti-union, the delegates are fully engaged in the upcoming midterm elections, supporting worker-friendly candidates from Memphis to Knoxville and from Clarksville to Chattanooga.

Driving home the point that workers have much to gain or lose in the upcoming election cycle, delegates heard from Jeff Francis, a Workers Compensation expert with the Tennessee Department of Labor, who described cuts in benefits and eligibility that were recently approved by GOP-controlled majorities in the Tennessee state legislature.

“Elections have consequences,” declared IAM International President Tom Buffenbarger in a keynote address to delegates. “With barely two weeks to go until election day, it’s hard to believe some people are still undecided, especially when the differences between candidates are often so dramatic. But that’s why we have to step up our ground game right now. Those undecided voters have the power to tip close elections either way.”

IAM members in Tennessee have a long tradition of being legislatively loud and proud on behalf of fellow members and retirees. Southern Territory GVP Mark Blondin praised the State Council’s officers for their commitment to political education, organizing and community service. “This is a first-rate team of activists, among the very best in the country,” said Blondin.

In addition to the presentation on Worker’s Comp laws, delegates heard from IAM Grand Lodge Rep. Jim Reid, who described the ins and outs of the IAM’s High Performance Work Organization (HPWO), and from IAM Associate General Counsel Bill Haller, who gave an update of labor-related issues before the U.S. Supreme Court and developments at the National Labor Relations Board (NLRB).

Concluding the three-day event, delegates and guests took part in the Tennessee State Council’s Third Annual Sporting Clay Shoot to benefits Guide Dogs of America (GDA). “We raised about $6,000 for Guide Dogs in each of the first two years, but this year, we raised more than $11,000,” said State Council President Rickey Wallace. “This event gets more popular each year and I want to thank everyone involved for helping to make it such a success.”