It’s a Good Day to Thank This Boston Machinist 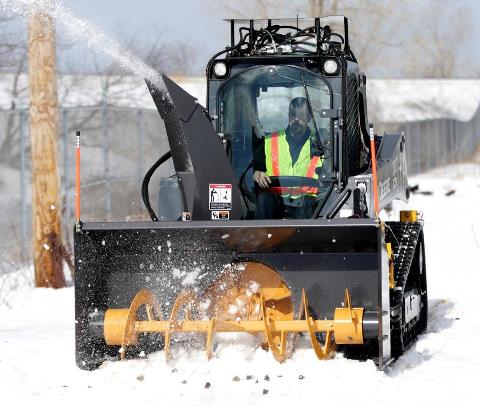 Boston’s railways will stay clearer during today’s blizzard because of the ingenuity of IAM Local 264 member Michael Haywood.

Haywood, an MBTA Machinist, came up with the idea during a barrage of powerful 2015 winter storms. The transit system, which has more than a half-million riders daily, had been brought to its knees.

The National Guard had been brought in to shovel. Haywood, known to his co-workers as “Haywire,” knew there had to be a better way.

“So he thought of one: mounting a John Deere vehicle often used to scoop dirt—it’s called a skid-steer loader—onto railcar wheels in order to clear the snow-packed tracks,” reports the Boston Globe.

The contraption worked. And MBTA hired a company to build eight machines based on Haywood’s prototype.

Here it is in action:

I suspect the first-of-its-kind Compact Track Loader, invented by #MBTA machinists, will get a workout tomorrow. #bosnow #blizzard2017 pic.twitter.com/gkKGI3Qjd1

“It’s like using a scalpel versus a hatchet,” Haywood said.

But despite the resourcefulness of Haywood and MBTA Machinists, more than 500 IAM Local 264 jobs, including Haywood’s, are on the line in Massachusetts.

“How does MBTA reward dedication and creativity?” asks District 15 Business Representative Mike Vartabedian, a former “T” Mechanic. “The very next week, the MBTA proposes to outsource his job. Michael’s ingenuity speaks for itself. John Deere bringing his retrofit in-house, literally offering him a job, confirms it. Brother Haywood is a strong voice for the IAM on the shop floor, and a real leader calling on the Massachusetts Fiscal and Management Control Board to reject privatization efforts.”

These hard-working, experienced mechanics have the best “miles between breakdowns” record in the country, but are facing mass layoffs as a result of misguided privatization efforts. For generations, Local 264 has been creating ways to keep MBTA’s buses and trains running every single day.

Prior privatization efforts have been failures, and the public cannot trust the numbers put forth by private companies that are backed by biased data sources.

Massachusetts workers and riders agree that the time to invest in public transit is now.

Click here to email the MBTA. Tell them to reject efforts to outsource core MBTA services.

“Our members constantly provide solutions for any obstacle they face,” said Eastern Territory General Vice President Jimmy Conigliaro, Sr. “No matter the situation, the dedication and resolve they bring to the job day-in-day-out in order to get the job done is second to none. Still, they face the constant threat of privatizing their jobs to the lowest bidder, which is nothing but a bargaining chip to drive down wages, benefits and working conditions.”

“Nobody understands these jobs and what it takes to keep MBTA moving like the dedicated professionals servicing them,” said District 15 Directing Business Representative Juan Negron. “The highly skilled IAM members bring a level of professionalism, experience, and ‘can do, will do’ to the task at hand, every day, to solve any problems they may face.

“Yet the state wants to outsource these innovative, dedicated workers in an effort to pay for their own lack of investment into the system, leaving equipment, facilities antiquated, and in disrepair.”

Learn more about the campaign to save Massachusetts public transit at InvestNowMA.org.