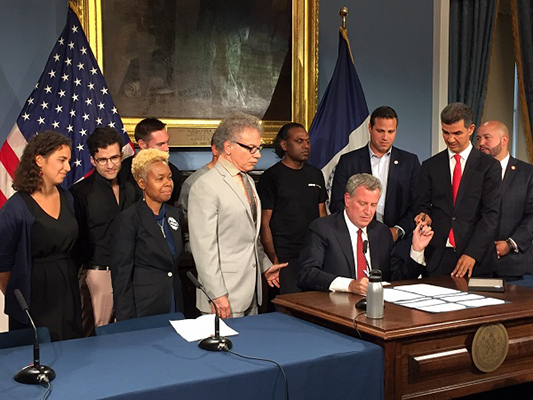 The signing of NYC council member Ydanis Rodriguez’s proposed law is the work of the IDG and their ability to unite thousands of ride-hail drivers and push for the change.

“This is a historic day, tipping is a vitally important source of income for thousands of families who are struggling to make ends meet right now,” said IDG founder and President Jim Conigliaro, Jr. “This is just the beginning too, there’s much more to be done to help these drivers achieve the basic benefits all workers deserve.”

In April, the New York City’s Taxi and Limousine Commission granted a petition by the IDG to create a rule requiring ride-hailing services to add in-app tipping which led to Uber to offer in-app tipping nationwide.

The Independent Drivers Guild represents over 45,000 For-Hire Vehicle drivers in New York City. The IDG is the first nonprofit labor organization to negotiate a seat at the table with ride share company and the first to offer crucial new protections and essential benefits while building worker power.