Machinists Fighting Back Against Right to Work for Less 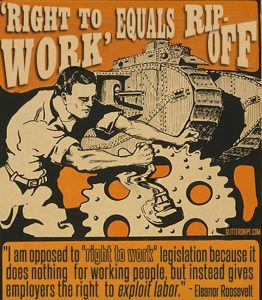 As the battle against “right-to-work” laws heat up across the country, some IAM members have gone into full “Fighting Machinist” mode. In the past two weeks, legislators in Missouri, New Hampshire, Kentucky and even West Chester Township, Ohio have either passed or are in the process of passing the anti-worker legislation.

IAM member and Missouri AFL-CIO President Mike Louis is working to turn the table on Missouri lawmakers by filing several versions of an initiative petition that would amend the state constitution to protect union negotiating rights. The amendment would reverse “right-to-work” laws by granting employers and employees the right to negotiate contracts requiring all employees to pay fees cover the costs of union representation.

Township trustees in West Chester, Ohio are working to pass a resolution to make the township a “right-to-work” community. IAM Local 1943 President and Directing Business Representative Neil Douglas is taking a stand against the trustees of the township where he lives.

“West Chester needs to be focused on other things besides stomping down worker’s rights for a voice in the workplace,” Douglas told WLWT-TV during an interview this week.

“The push for so-called right-to-work laws has nothing to do with giving workers the freedom to choose,” said Eastern Territory General Vice President Jimmy Conigliaro, Sr. “It is the influence of big corporate special interests to cut wages, weaken the middle class, and taking away the tools  unions have to defend the rights of working families. The IAM, our members, and working families across the U.S.A. will continue to push back against anti-worker legislation wherever it rears its ugly head.”

Expect to see more of these legislative battles waged against unions all over the U.S. Contact your local or district to find a way to get involved and let your lawmakers know “right-to-work” is wrong for your state.