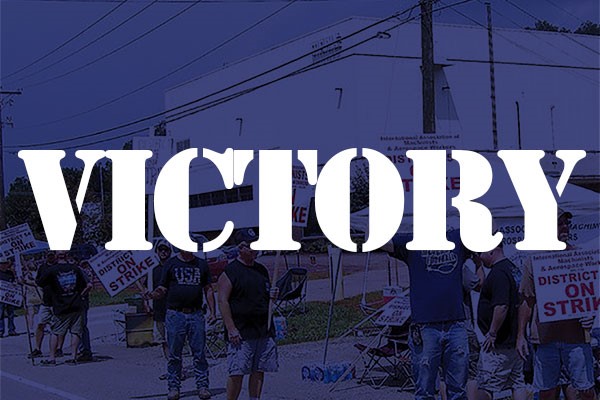 A main point of contention was language regarding the plant reduction of workforce. The prior agreement provided protections for any layoff or shutdown. The company proposed language that would allow shutdowns and layoffs without notification for periods of less than a week. Other issues included wages and contributions to the IAM National Pension Plan. IAM Negotiators returned to the table along with a federal mediator and were able to secure an acceptable agreement.

“The plant layoff notification language is an all-important protection for these workers,” said IAM District 54 President and Directing Business Representative T. Dean Wright, Jr. “This negotiating committee stood firm, and we were able to not only back the company off of the previous proposal, we were able to make some improvements to the existing language.”

The negotiating committee was able to secure improvements to existing vacation, while holding the line on wages and pension contributions. Just as important, negotiators were able to achieve company-paid health care benefits reinstated retroactively to the date the work stoppage began, and COBRA reimbursements to employees who were forced to purchase health care benefits.

“Being able to maintain health care for these workers was extremely important,” said District 54 Business Representative Don Riffee. “Among other issues, a member had a child during this relatively short strike, so uninterrupted benefits was crucial. A huge thank you goes out to the community and to the members of Local 1471 working nearby at Miba, for their unwavering support and solidarity during these trying times.”

“Congratulations to these members and the negotiating committee,” said Eastern Territory General Vice President Jimmy Conigliaro, Sr. “Together they demonstrated real solidarity by walking out for the protections a good union contract provides. They stood together to protect their future from a loophole that could be exploited by the company to drastically affect their take-home pay. My thanks go out to PDBR Wright, BR Don Riffee, and the entire District 54 staff for their leadership during this negotiation.”