‘They Privatize; We Organize’ 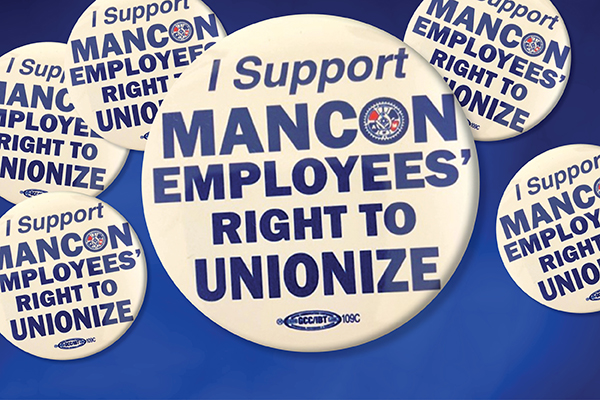 After a long, difficult fight for the Machinists of IAM Local 264 ended in a victory for working families of the Massachusetts Bay Transportation Authority (MBTA), another group of workers who had a front row seat for the action are fighting back as well.

Thirty workers employed at a MANCON parts and supply warehouse, who recently organized with the IAM, have ratified a four-year collective bargaining agreement. The work was previously performed by public-sector workers, but was part of the outsourcing campaign by the MBTA.

“These workers saw firsthand the real agenda behind Gov. Baker’s scheme to privatize these jobs to for profit companies,” said District 15 Assistant Directing Business Representative Mike Vartabedian. “They watched the members of Local 264 stand together to prevail in the fight for their jobs, and to keep public transportation public.”

The slogan ‘they privatize; we organize’ became the mantra for the members of Local 264, and the workers at MANCON saw the support of the IAM, and the members working together, and decided they wanted to be a part of it. After voting to organize, a first agreement was reached with the employer recently.

The new four-year deal featured a pay increase of $2 per hour, with annual increases based on the CPI, and an additional 50 cents per hour for training new employees. Negotiators were also able to get the IAM National Pension Plan for the new members, with contributions of 75 cents, increasing to $1.35 over the life of the agreement.

Other gains were a safety footwear allowance, as well as, securing their healthcare in writing, in their new IAM contract.

“Congratulations to the new members of Local 264,” said Eastern Territory General Vice President Jimmy Conigliaro Sr. “These workers saw what’s possible when we stand together in the labor movement. Decent jobs with decent wages and benefits are essential to working families and protecting that with an IAM contract is invaluable.”