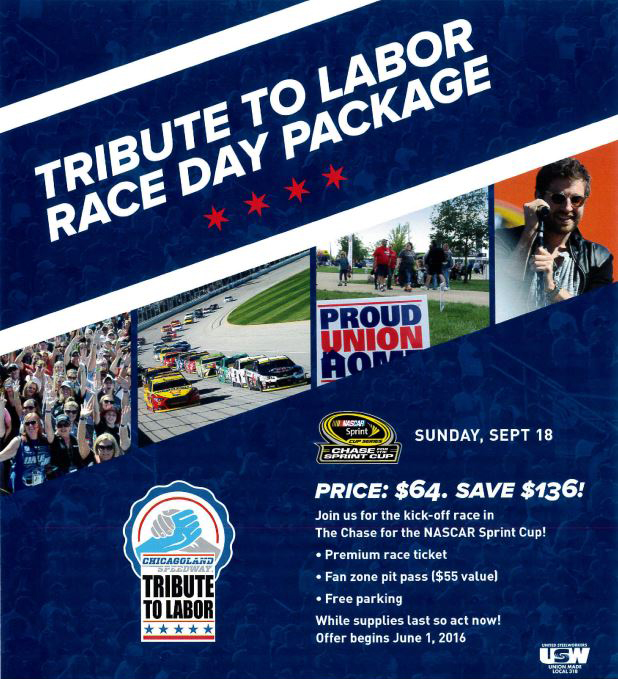 Join the IAM and dozens of other labor unions in participating in the 2016 “Tribute to Labor” race day at the Chicagoland Speedway in Joliet, IL on September 18, 2016.

The one-day event, held each year in honor of labor unions, will be a part of the kick-off race in the Chase for the NASCAR Sprint Cup Series.

Like the city of its namesake, the Chicagoland Speedway was built by the hands of union members. The $130 million facility is 100 percent union ma

de – that’s more union labor than nearly any other track in America.

An estimated 70-thousand fans are expected to attend this year’s race, which will be telecast to millions via a national broadcast on the NBC Sports Network, as well as internationally.

IAM members interested in attending will receive a premium race ticket for the discounted price of $64 (that’s a savings of $136!). The labor package includes a free fan zone pit pass (valued at $55) and free parking. Fans will also get to enjoy a live concert – performer to be announced.

And, don’t forget to bring the kids! This year’s race will be sponsored by Nickelodeon and will feature unprecedented family-friendly activities and entertainment, including a Teenage Mutant Ninja Turtles 400.

Individual Locals that sell the most tickets will receive special recognition on the pre-race stage.

For more information or questions, contact your designated District/Local coordinator: