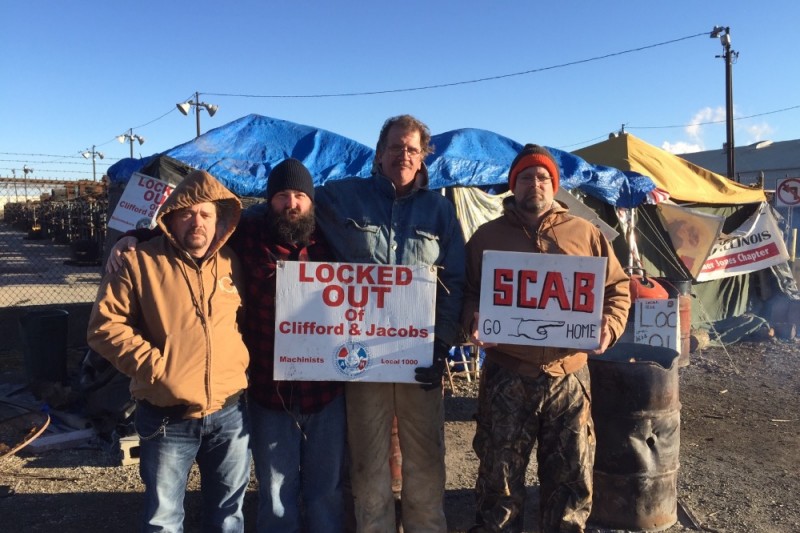 Members of IAM Local 1000 were locked out of work for 5 months during failed contract negotiations with Clifford-Jacobs Forging Company in Champaign, IL.

Members of IAM Local 1000 are back on the job after a five-month lockout with Clifford-Jacobs Forging Company in Champaign, IL.

The lockout began in September 2015 when the 70 workers voted down the company’s proposed offer, which included no wage increases, plus reduced health insurance and pension contributions. While the members authorized a strike, they chose to continue working through negotiations. But, when they reported to work the following day, Clifford-Jacobs refused to allow the workers back in and bussed in temporary workers to replace the union members. A federal mediator was brought in to reach a resolution.

IAM District 8 Business Representative (BR) Ron Stanley says that while he cannot disclose the terms of the new contract, per an agreement between all parties, the new contract puts IAM members in better standing than the company’s previous offer.

“Compromises were made on both sides,” said Stanley. “But this is a better agreement for our members than what they went out on.”

“IAM Local 1000 members received an outpouring of support from other unions and their community during this difficult time,” said IAM District 8 Directing Business Representative (DBR) Steve Jones. “People made donations, brought in food, the Plumbers and Steamfitters Local 149 held a special fundraising event and raised about $11,000, and Illinois State Sen. Scott Bennett helped with ensuring our members’ unemployment insurance benefits. IAM District 8 is proud to be a part of such a great community of union supporters and working families. Thank you to the city of Champaign, local leaders and Sen. Bennett’s office for your continued support.”

“Congratulations to the members of IAM Local 1000 in reaching a contract with Clifford-Jacobs Forging Company,” said IAM Midwest Territory General Vice President Philip J. Gruber. “Negotiation discourse can be difficult, but as union members we must stay the course in order to ensure fairness and equity in the workplace. Your solidarity was instrumental throughout this process. A special thank you to District 8 DBR Steve Jones and BR Ron Stanley for their hard work in getting Local 1000 members back on the shop floor.”