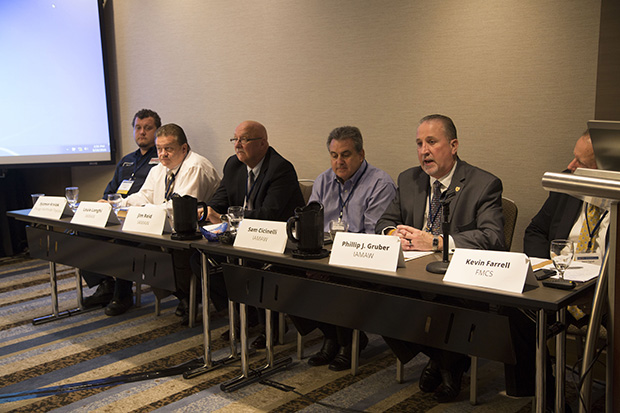 And it is the IAM Local 701’s Education and Training Center.

The fruit of a unique partnership between FMCS, the IAM and employers, the Local 701 Training Center was the main focus of a panel on how FMCS funding was used to help create the state-of-the-art automotive apprenticeship training program, located in Carol Stream, IL. FMCS is an independent agency whose mission is to preserve and promote labor-management peace and cooperation.

“The truth is: the middle class is shrinking,” said Gruber. “I think it’s safe to say that everyone in this room knows that. The idea of the ‘American Dream’ is increasingly becoming just that – a dream.”

“Part of the problem is a lack of good-paying jobs,” continued Gruber. “Yes, we live in an era where employers would much rather pay a worker $2 an hour to make their product in Mexico or China, than to support workers here in their home country.

“But the other part of the problem is – skills. Or, a lack thereof. For years, we’ve been telling our children that to make it in life you have to finish high school and get a four-year degree. In hindsight, what we have learned is, that was a huge mistake to our future workforce and to our country. The truth is jobs that require a four-year degree today make up less than half of the job market.”

Seeing the problem early on in the automotive field, Cicinelli said he started pushing for an IAM-owned automotive training center. One that could train apprentices of today – and tomorrow.

“The greatest challenge in creating the school was the funding mechanism,” said Cicinelli, who after years of negotiations was able to secure a “nickel fund” in which participating employers donated 5 cents for every hour worked. “That’s when Gruber put us in contact with Reid, who assisted us in securing an $80k grant from FMCS. That catapulted us into opening up the program one year sooner.”

The school has experienced great success – participating employers have tripled, nearly 400 courses have been taught, and the program is still in its growing stages with plans for expansion.

“When we wrote the grant in 2011, there were 60 employers donating to the fund out of over 500,” said Reid, who gave tips on how to write a successful FMCS grant application. “When we just did a recent grant application, there were 310. So within five years, it’s grown by 500 percent of the number of employers participating.”

And plus, there are some key differences when comparing those programs to Local 701.

“A lot of the other schools’ programs are for about 13 months – their students are usually rushed,” said Longhi. “I actually have graduates coming from those schools asking and applying to come our school. And I ask them why? They found out they didn’t learn enough.”

“At the IAM Local 701 Education and Training Center,” continued Longhi, “we have smaller class sizes and our program lasts for about three years for automotive and four years for auto and diesel. Also, our students do not pay tuition and we put our apprentices to work after their first class.”

“It’s a great opportunity,” said Krolak, who is currently a third-year apprentice at Chicago Northside Toyota. “There’s two other automotive schools here in Chicago. They’re $45k. I have a mortgage. There’s no way I could afford to put my family in $45k worth of debt. At Local 701, I’ve gotten a lifetime’s worth of experience for basically promising that I will be an IAM member. And I will – for the rest of my life.”

International studies suggest that for every dollar spent on apprenticeships, employers get an average of $1.47 back in increased productivity, reduced waste and greater front-line innovation.