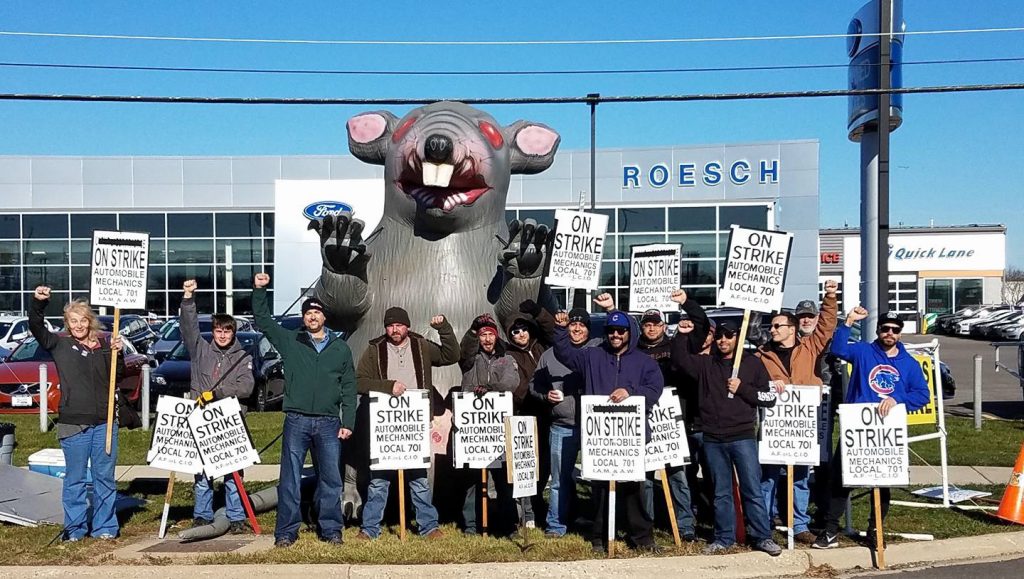 IAM Local 701 auto mechanics working at Roesch Ford and Roesch Ford Trucking Center in Bensenville, IL walked out on strike on Thursday, November 10, 2016 when the employees voted not to accept the owner, Dan Roesch’s, offer of a “14-month extension contract” providing the same terms as the contract which expired July 31st.

“It wasn’t just the offer that had the employees upset, it was the statements made by the owner at the bargaining table that he intended to pull out of the Local 701 Defined Benefit Pension Plan upon the expiration of the 14-month contract,” said IAM Local 701 Business Representative Bill LePinske.

There is some history of Roesch coming after his mechanics’ contract, says LePinske. Prior to this last agreement, the dealership was covered under the industry standard contract, The Standard Automotive Agreement, until what was then Elmhurst Ford which was purchased by Roesch. During the purchase Roesch had the right to negotiate a new bargaining agreement and he took advantage of the economic downturn and high unemployment to gut the workers’ agreement.

“Among the worse provisions of the previous agreement was a move to ‘seniority by productivity,’ a change which effectively cost the workers their seniority, as work flow and productivity can easily be manipulated by management,” said LePinske. “Seniority provisions are intended to protect workers who have been with an employer from lay-off based on their date of hire. Naturally as mechanics age, their productivity tends to go down.  In a ‘seniority by productivity’ situation, the employer could lay off the employee who has been in service the longest as they slow due to the effects of aging.

“In addition to the pension problem and the seniority language, high health insurance premium co-pays were other issues the IAM brought to the table that the employer was unwilling to discuss.”

“We are not going to allow Roesch to further gut our contract or let him set the table to take away our pensions in 14 months,” said bargaining unit member Brian Ilic. “My brothers and I will continue to strike until Roesch comes to his senses.”

“The Standard Automotive Agreement covers nearly 1,200 of our members at hundreds of other Local 701 represented dealerships and we are not going to allow a substandard contract at Roesch Ford to lower the bar for the rest of our membership,” said Cicinelli. “In the words of our new International President Robert Martinez Jr., we’re going to put the fight back into the Fighting Machinists!”

“IAM members at Roesch Ford and the Roesch Ford Trucking Center are among the most highly-skilled, talented mechanics in the auto industry,” said IAM Midwest Territory General Vice President Philip J. Gruber. “We cannot let one‐sided negotiations aimed at gutting our members’ rights to retire with dignity continue. We have to fight. As Local 701 members walk the picket line today, we want them to know that we’re standing with them in solidarity. We are with them in their fight for a secure future.”

“Due to the layout of the property, it has given the unfortunate appearance that the Volkswagen store is also out; but that is not the case,” said LePinske. “Unfortunately, the Volkswagen store owned by Dan Roesch’s sister, Jeanine Roesch, is situated right between Roesch Ford and The Roesch Ford Truck Center. This has had a negative effect on the Volkswagen store and our members working there. Our members and the community should continue to do business with Roesch Volkswagen.  The owner Jeanine has remained committed to providing her union employees with a competitive contract which provides good benefits for the workers and their families.”

Members are encouraged to stop by the strike line and show their support. Roesch Ford is located at 333 W. Grand Ave. in Bensenville, IL.