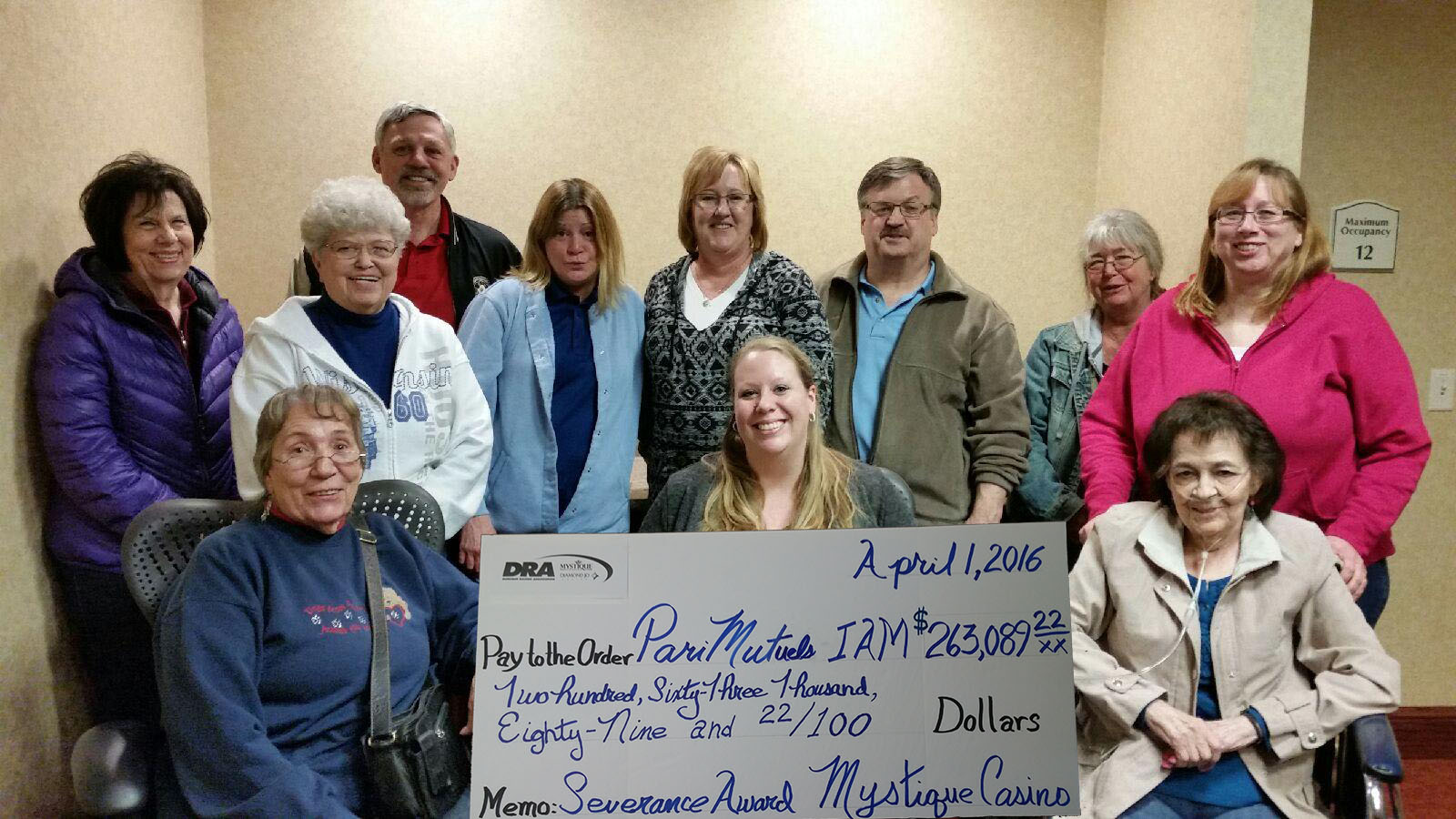 They could hardly believe it was happening. After all, it was April Fools’ Day. But 12 IAM Local 1238 members of Dubuque, Iowa, known as pari mutuels, hit it big when IAM District 6 negotiators helped them win a $263,089 arbitration award against Mystique Casino of the Dubuque Racing Association (DRA).

The group known as the “Triumphant Twelve” received payouts ranging from $3,000 to more than $33,750, based upon their years of service.

“This has been a long time coming,” said IAM District 6 Directing Business Representative John Herrig of the arduous process, “but well worth the effort.”

The arbitrator’s final decision was issued just prior to Christmas 2015. But working out the details of exactly what was due took 90 days of wrangling before the parties reached an agreement on the final amount.

The grievance was the result of Mystique Casino, which operated live greyhound racing, opting to renew its gaming license without the pari mutuel license, thus triggering a severance agreement, which the casino refused to honor.

Local 1238 member Chris Smith, one of the arbitration award beneficiaries, commented to the bargaining unit, “Remember all those many years ago when we voted the union in and we were out on the street? This is what we were after. These guys did a good job representing us.”

The IAM lobbied heavily to keep the jobs, which also included non-IAM jobs held by dog breeders, trainers and handlers, as well as the pari mutuels. During the course of the legislative session, lawmakers, non-profits and charities were continually told by DRA President Jesus Aviles that the dog track was a financial drain on the casino and that if live greyhound racing was eliminated, there would be more money available to give to non-profits and charities.

Legislators, non-profits, and charities bought in to this promise – which has never come to fruition. In fact, Mystique Casino’s profits have fallen 6 percent since they dropped the dogs.

Many in the Iowa House and Senate supported the IAMAW effort. But it was former State Rep. Pat Murphy (D) of Dubuque, who led the charge and was instrumental in modifying the law to save and protect the jobs, along with Iowa Federation of Labor Secretary-Treasurer Charlie Wishman, who lobbied at the state capitol almost every day.

The same cannot be said of all of Dubuque’s legislators, especially State Sen. Pam Jochum (D) who seemed to have no problem with eliminating the jobs.

According to Herrig, Sen. Jochum misrepresented the Machinists’ position.

“We are so disappointed with Sen. Jochum, who will now be remembered by the Machinists as a once strong labor advocate turned ‘anti-worker legislator,’” said Herrig. “We certainly hope her actions were not bought for a mere thirty pieces of silver.”

Some of the pari mutuel employees still work at the Iowa Greyhound Park under a new license holder, says Herrig. Others have either retired or moved on to other employment.

“Congratulations to the ‘Triumphant Twelve’ on your much-deserved arbitration win,” said IAM Midwest Territory General Vice President Philip J. Gruber. “This win is important to all of organized labor and cuts to the very core of what we do as a union. Our ability to service and represent our members is their protected right. Congratulations to IAM District 6 Directing Business Representative John Herrig, Business Representative Gary Papenheim and the entire staff on a job well done.”