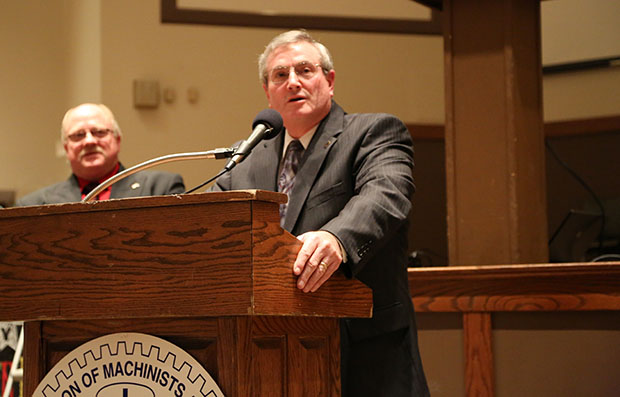 “For the past 35 years, Tony has been an outstanding trade unionist and leader of this great union,” said IAM Midwest Territory General Vice President Philip J. Gruber. “His list of accomplishments is a testimony to his great leadership abilities. A true leader strengthens his followers. He teaches by setting examples and empowering others. Tony has not only been a great leader and mentor, but an inspiration to us all. He truly is a seasoned, well rounded journeyman and union leader.”

“Tony has given so much to so many, never asking for anything in return,” said IAM International President Bob Martinez, Jr., who was also on-hand for the event. “He is a true trade unionist who sacrificed his own wants and needs for Machinists Union members and the labor movement—and he’s done that year after year. It’s been a real privilege, brother. There are men and women who sleep better tonight because of you.”

Rippeto started his career as a member of IAM Local 777 when he helped organize his non-union truck shop in 1980. He was working as a truck mechanic. By 1982, he was a Shop Steward and local officer. As an officer, Rippeto held the positions of Sentinel, Conductor, Vice-President and Local 777 President.

“The turnout for Tony was outstanding,” said Conner. “Tony was well respected by IAM leadership, our membership and the business community. His retirement is well-deserved, but he will leave a void in our union and the labor community.”