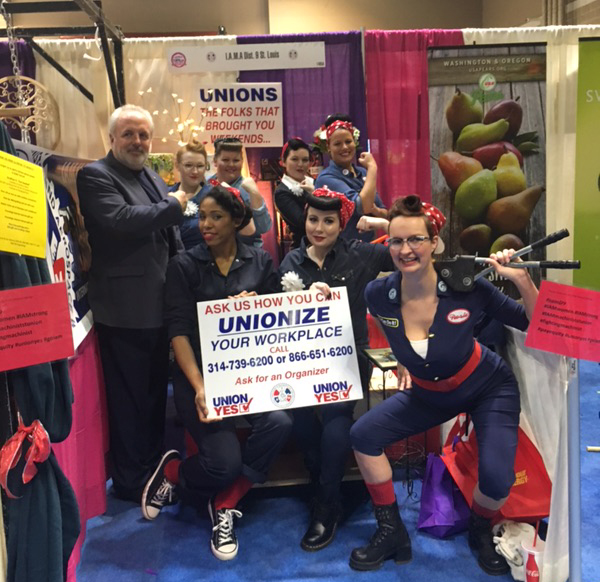 Members of the IAM District 9 Community Service and Human Rights Committee were the talk of the town at a recent outreach event, the “Working Women’s Survival Show,” outside St. Louis. Crowds flanked to the table – including an unexpected flash mob of Rosie the Riveters, which drew even more attention to the Machinists booth.

Members of the IAM District 9 Community Service and Human Rights Committee were the talk of the town at a recent outreach event for women in St. Louis. They were among more than 400 exhibitors featured at the “Working Women’s Survival Show” at the St. Charles Convention Center – and their booth could only best be described as a huge hit.

Though initially told by event coordinators that they could not participate because they were a “political organization,” Community Service and Human Rights Committee Chairman Scott Hargis worked with Local 660 members Michelle Windmiller, Community Service Recording-Secretary Jennifer Kahl, and Shannon Anderson; Local 777 members Amy Wokovich and Bethany Alexander; and Peggy Flinn and Dacia Strattered of District/Local 837 to ensure a place for a Machinists Union booth at the expo’s female-tailored event.

Surrounded by food, fashion and fitness vendors from all over the country, District 9 members set up their booth with “IAM H.E.L.P.S. in the Community” messages, raffle items, bumper stickers, and buttons that read “A woman’s place is in her union” to educate and engage attendants about the value of the IAM, unionization, organizing,

community, and the power of union women.

“They hoped, at best, for general exposure, a chance to mingle with the general population, to teach people a little about union career choices,” wrote the St. Louis Labor Tribune. “What they got was: visitors who called themselves sisters and brothers [and] folks who wanted to help with the union’s community service projects.” 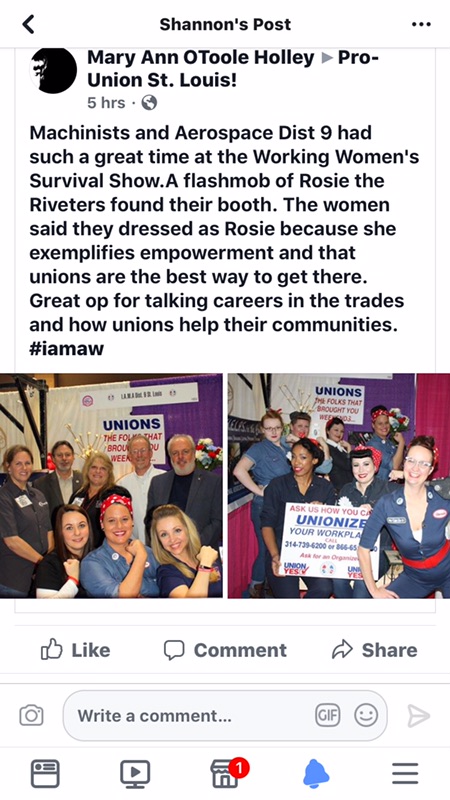 Crowds flanked to the table – including an unexpected flash mob of Rosie the Riveters, a club of women known as the Decade Dames who meet monthly and dress in themes, which drew even more attention to the Machinists booth.

“Others came to the booth to thank a union, to remember how union benefits kept their families strong and how their father couldn’t have survived without his union pension,” wrote the Labor Tribune.

“We had a ball,” said Hargis, noting the event was a last minute decision by the District and that they arrived with only one Rosie to jazz up their booth, but ended up with seven, and a super crowd of people wanting to watch and learn more about the Machinists Union. “This was an ideal place for us to talk about what unions do, the volunteer work we do for the community and what it takes to become a union member. We had a message to deliver, but what I found was that people came into the booth and told us their stories. We went from being a voice to an ear. They wanted to talk to their brothers and sisters of labor. It was an unbelievable experience. It showed that we are all a family and we fight for each other. It was a great day for unions and labor. Just wonderful. I can’t describe it.”

Hargis said organizers estimated nearly 40,000 people were in attendance over the two-and-a-half day event. Visitors to the Machinists booth were also invited to take a selfie in costume and post it on District 9’s Facebook and Twitter pages. 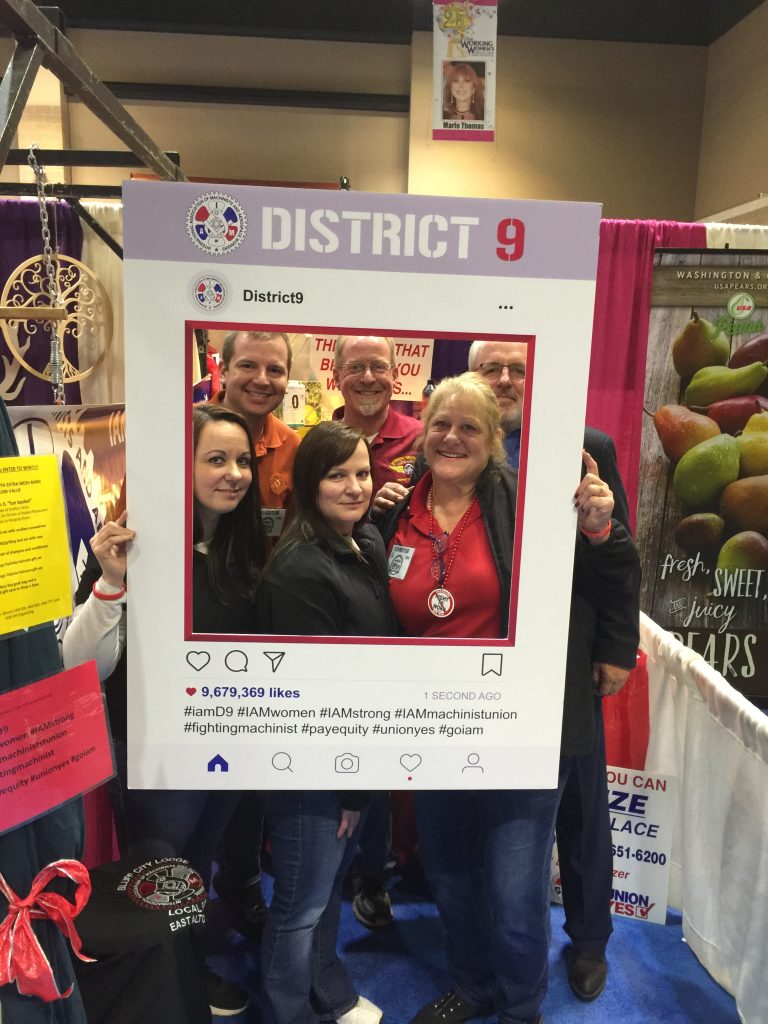 District 9 Directing Business Representative Mark Conner said he was overwhelmed with the success of the booth at a show not typically considered union-friendly.

“We are definitely going to do more things out in the general population, rather than always preaching to the choir,” said Conner. “Our Community Service Committee members have been doing an outstanding job of energizing the various diverse groups within and outside our union.

“Unselfish members and individuals such as these are the ones who will set the ground work for the next generation. I couldn’t be more proud — and they put this booth together at the last minute!”

“Congratulations to IAM District 9 Community Service and Human Rights Committee members on what turned out to be show stopping event,” said IAM Midwest Territory General Vice President Philip J. Gruber. “Though originally told they couldn’t participate, IAM District 9 members wouldn’t take no for an answer. They recognized an opportunity to engage working women in the St. Louis area and educate them on unions and what the labor movement has accomplished for female workers everywhere – and they seized it. Great job.”