IAM H.E.L.P.S. in the Community 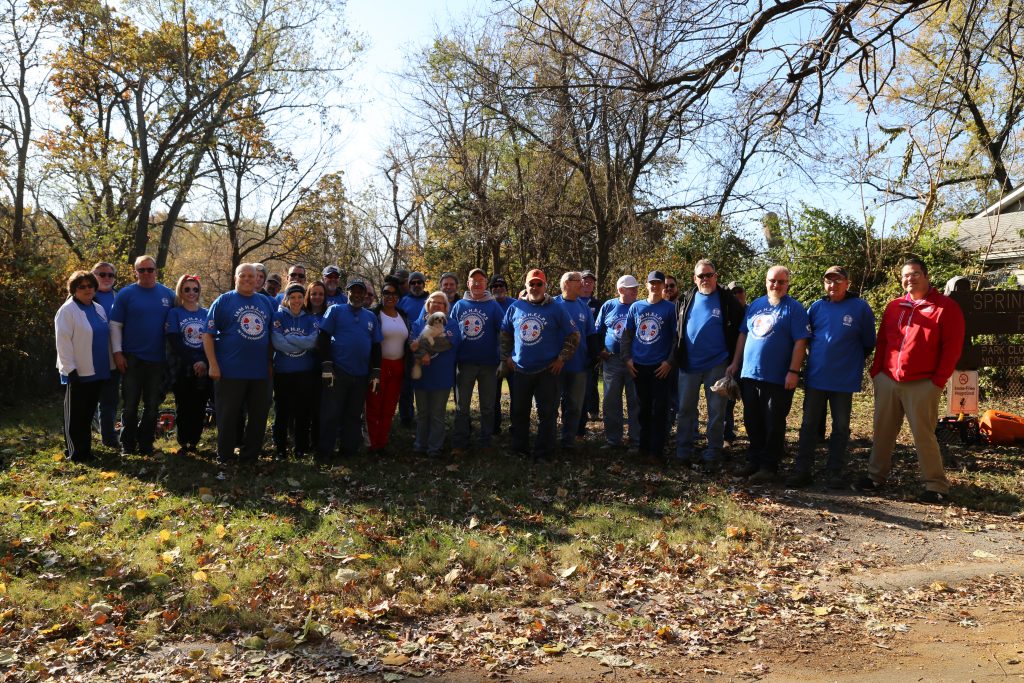 Nearly 30 volunteers from IAM District 9 descended upon a disheveled, overgrown and abandoned park in Ferguson, Missouri with chainsaws, shovels, mowers, and rakes this November.

The Spring Valley Park restoration effort was a part of the IAM Midwest Territory’s “IAM H.E.L.P.S. in the Community” program. H.E.L.P.S. stands for Honoring, Engaging, Lifting, Providing and Servicing.

Volunteers traveled from all over the district to help this local community take back their park, which has become victim to neglect and illegal activity over the years.

“We heard there was a park that residents were afraid to have their kids come and play in because it was so overgrown and there were kids in the back of the park that were up to stuff that some residents didn’t want their children around,” explained Dave Weaver, IAM District 9 Directing Business Representative. “It was so secluded that anything could go on back there. We were approached and took a walk around and decided that if we cleared out all the fence lines around the park, that would free it up and make it a lot safer.”

“We wanted to reach out to the community and let them know we’re here to help,” said Scott Hargis, Chair of the IAM District 9 Community Service Committee, who credits IAM Local 1345 Secretary-Treasurer Mike Ringo for the helping coordinate the project. “Ferguson has had a lot of issues lately, a lot of negative press. We’re here to change all that. We’re here to make a difference. We have members in this community that not only live here, but work here. So we felt that this was an area that needed us.”

IAM District 9 members performed a range of work on the 0.5-acre park which included cutting down and removing trees and vegetation from the fence line, removing weeds, cleaning up debris throughout the grounds and on the playground equipment, raking leaves, and mowing the grass.

The District plans to tackle the restoration in two phases – starting with this most recent effort, followed by phase two.

“We’re coming back for phase two in the spring time,” said Hargis, “where we’re going to paint the playground equipment, re-manicure the grounds again, and then we’re going to hold a barbecue for the community and neighborhood to come out and enjoy their park again.”

“Congratulations IAM District 9 on a great IAM H.E.L.P.S. event,” said IAM Midwest Territory General Vice President Steve Galloway. “Ferguson is an important area of focus to the IAM as this is our second IAM H.E.L.P.S. event in the area in the last two weeks. I’m honored to see the hard work and effort District 9 members have put into this two-phase project – some traveling from as far as two hours away to participate. This is what making a difference is all about.”

For more information on the IAM Midwest Territory’s “IAM H.E.L.P.S. in the Community” program, click here.