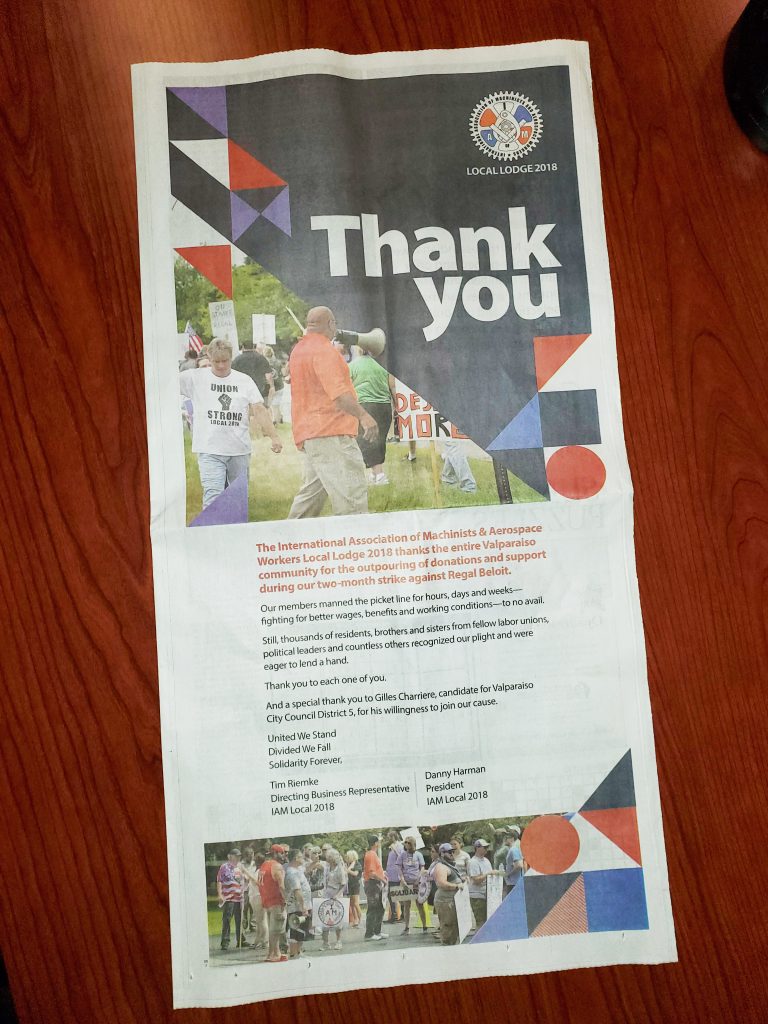 Members of IAM Local 2018 recently took out a full-page ad thanking the residents, fellow union brothers and sisters, and political leaders for their support during the Local’s two-month strike against Regal Beloit in Valparaiso, Ind.

“The International Association of Machinists & Aerospace Workers Local Lodge 2018 thanks the entire Valparaiso community for the outpouring of donations and support,” reads the full-page ad that ran in the Northwest Indiana Times on Sunday, September 29, 2019. “Our members manned the picket line for hours, days and weeks –  fighting for better wages, benefits and working conditions –  to no avail. Still, thousands of residents, brothers and sisters from fellow labor unions, political leaders and countless others recognized our plight and were eager to lend a hand. Thank you to each one of you.”

Members of IAM Local 2018 returned to work September 3rd as part of an agreement reached between the union and the company, following Regal’s abrupt announcement that it would be closing the Valparaiso facility.

The outpouring of support during the strike included tons of support from residents, fellow IAM members, and other union brothers and sisters walking side-by-side on the picket line, donations of food and water, and tweets from 2020 presidential candidates Sen. Bernie Sanders (I-VT), Joe Biden (D-DE), and Pete Buttigieg (D-IN).

An effects agreement covering severance and benefits was reached with the company and approved by the membership on Friday, September 27th.

IAM Local 2018 members employed at Regal Beloit produce parts for many vital U.S. aerospace defense programs, including Apache helicopters and Air Force One. The factory has been in Valparaiso for more than 100 years.