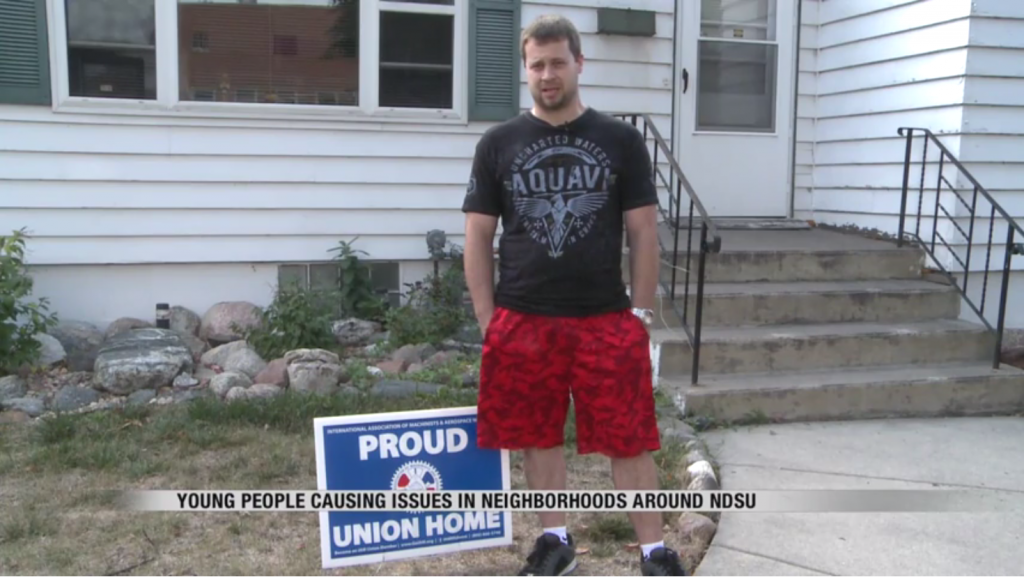 What’s union pride? When an IAM member runs down a thief for stealing his IAM “Proud Union Home” yard sign… (and his story makes the local news).

That’s what happened to IAM Local 2525 Shop Steward Scott Filler one night while relaxing at his home in Fargo, ND.

Filler, an agriculture assembly line worker at Case New Holland in Fargo, says he received the IAM Midwest Territory “Proud Union Home” yard sign from his Local just a few weeks prior. The nearly 13-year IAM member and son of a United Transportation Union member proudly displayed the sign in his front yard for all to see.

One night, while watching the evening news, Filler says he saw a news story about local residents complaining about college students from North Dakota State University (NDSU) partying at all hours of the night, playing loud music, vandalizing and leaving trash on neighbors’ lawns.

Filler lives about four blocks from NDSU. The news asked if any other residents had problems to contact the newsroom. At the moment Filler says he quickly recalled frequently seeing groups as large as 30 students walking by his house at times, but says he didn’t think much of it.

Shortly after midnight that same night, he heard a “ruckus” outside his front door.

When he went to the window to investigate, he saw a group of kids walking by – and noticed something was missing.

“I heard a bunch of hollering and screaming,” said Filler. “I happened to look out my window and saw a bunch of college kids out in front and I noticed my sign was gone.”

Filler quickly checked his house surveillance video and saw that one of the kids had just swiped the sign minutes earlier.

“It just happened literally before I looked out the window,” he said. “I went back to the window again and I saw the guy walking down the side walk with the sign above his head. My first reaction was to get my shoes on and go chase him and get my sign back.”

Filler chased the group of kids down and demanded the student who took the sign “walk back to my yard and put it back where you found it or I’m calling the cops.”

Needless to say the student complied, though Filler says he complained that it wasn’t Filler’s sign the whole walk back.

The entire ordeal was caught on Filler’s home surveillance system.

Filler called the news station and reported what happened. What followed was a full-on news story with Filler and his IAM “Proud Union Home” yard sign standing center stage.

Filler says he didn’t have to chase the student down. He could’ve just let the sign go.

But, in affirming what the sign stood for and recalling his days as a child when he himself stood on a Canadian Pacific Railroad strike line with his union father for 1.5 months, Filler says his union pride wouldn’t let him.

“Yeah I could’ve just gotten another sign,” said Filler, “but to me that sign is important. Being part of a union means a lot to me. What we get at work for being union, to me that’s worth fighting for.”