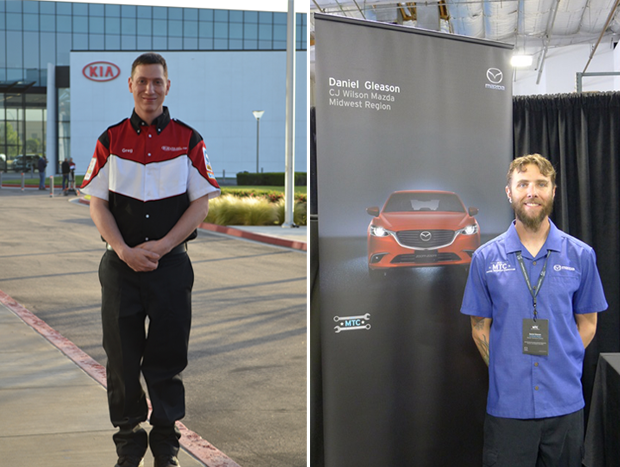 IAM Automobile Mechanics Local 701 members Greg Dubs, left, and Dan Gleason will be traveling to South Korea and Japan to represent the United States and North America in global Master Technician competitions for Kia and Mazda.

Two IAM Automobile Mechanics Local 701 members will be traveling to South Korea and Japan to represent the United States and North America in global Master Technician competitions for Kia and Mazda.

Local 701 auto mechanic Greg Dubs of Gerald Kia in Naperville, IL recently qualified to represent the U.S. in the “Kia Skill World Cup Competition,” to be held in Seoul, South Korea in late May. And, Local 701 auto mechanic Dan Gleason of CJ Wilson Mazda in Countryside, IL recently qualified to represent all of North America in the “Mazda Global Master Technician Competition,” to be held at the Mazda Motor Corporation headquarters in Hiroshima, Japan in early 2017.

“It’s great to have our members recognized for the true professionals they are in their craft,” said IAM Local 701 Directing Business Representative Sam Cicinelli. “Greg and Dan’s skills, knowledge and success as mechanics just goes to show that highly trained union technicians are among the best in the industry. We wish them both the best of luck in their respective competitions.”

To qualify, both men had to compete in regional and national competitions held throughout the country.

Dubs first had to complete an online 50-question test only available to Master/Certified Kia Technicians. Not only are competitors required to first pass the online test, but they are further vetted by what is called a “Fixed Right the First Time” score, recommendations from district managers and training instructors, and an extensive phone interview. Dubs moved on to the national competition as one of only four competitors from the central region to compete against a total of 16 competitors for the National Cup.

“I was extremely shocked to hear my name called as fourth in the country,” said Dubs.

Gleason competed against six other qualifying Mazda Master Technicians from the Midwest Region in a contest held at Mazda’s regional offices in Schaumburg, IL. Contestants had to first complete an extensive and grueling online test. Mazda officials also looked at technicians’ overall Customer Satisfaction Index (CSI) score before allowing them to take place in the competition. Gleason placed first overall in the online portion and had a CSI score near 100 percent. After finishing first in the regional competition, Gleason was able to move on to the North American Master Technician Competition. From there, he was chosen to be one of only two technicians to compete in Hiroshima.

“The competition itself was incredibly difficult mentally,” said Gleason. “I felt very honored to even be a part of the competition, and doing well enough to go to Japan to compete against the rest of the world is humbling. Not too bad for a guy that just loves to fix cars!”

“Congratulations to IAM Local 701 members Greg Dubs and Dan Gleason in finishing amongst the top of their craft,” said IAM Midwest Territory General Vice President Philip J. Gruber. “Their accomplishments speak to the talent, skills and training of top-certified union auto technicians – specifically those represented by IAM Automobile Mechanics Local 701, the largest mechanics union in the U.S. representing some of the most highly-skilled craftsmen in the nation. We wish both men well and know they will make our union proud.”