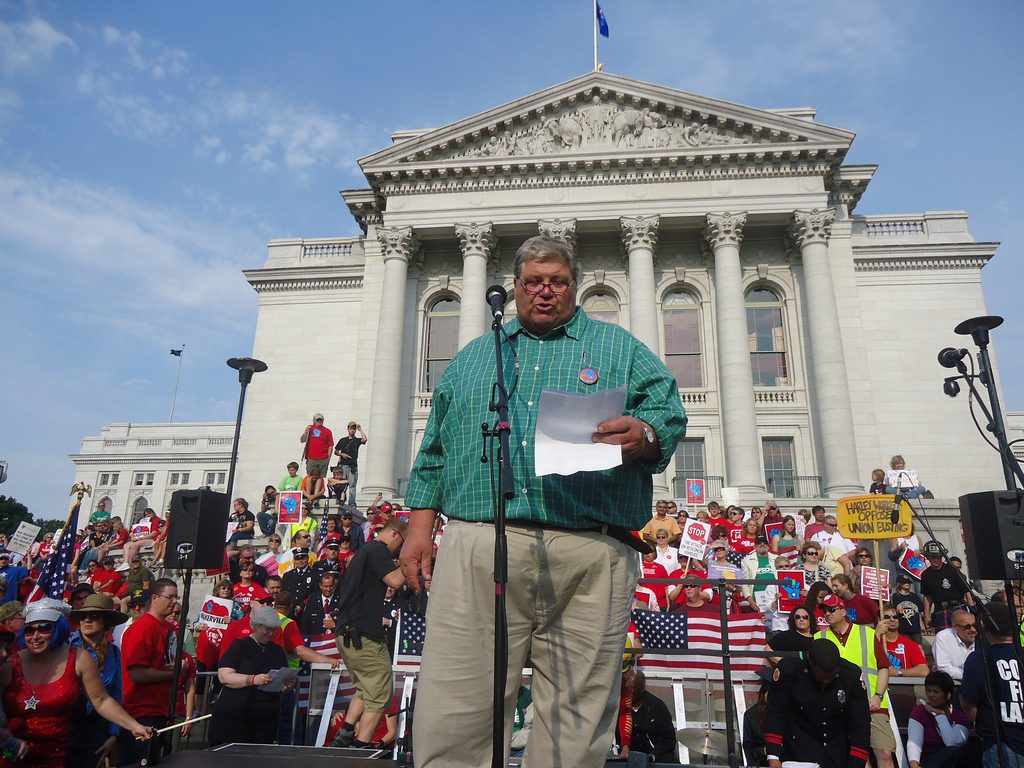 “It is with deep regret we announce the passing of labor advocate, fighter and friend Phil Neuenfeldt,” said IAM Midwest Territory General Vice President Philip J. Gruber. “Phil’s lifelong contributions to labor and the Machinists Union exceeded the dedication of a thousand men. From the shop floor to the Wisconsin state capitol, he was a great leader – a champion for the working class. His contributions to Wisconsin working families and the entire labor movement will reverberate for years to come. Thank you, Phil, for your service. You will truly be missed.”

Neuenfeldt began his labor career as a member of IAM Local 1916 while working at General Electric in Milwaukee. He held various positions of leadership in his local including chair of the bargaining committee. As an active member, Phil fought for fair contracts and improved health and safety conditions for fellow workers. He continued his work bridging gaps between labor and the community by working on economic development projects that benefited union workers and his entire community. Phil served the Wisconsin State AFL-CIO in many capacities, most notably as Secretary Treasurer and Legislative Director, before being elected President in 2010.

While working for the Wisconsin AFL-CIO, Phil put the Wisconsin labor movement on the offensive and advanced a working family agenda which included extending the ability to organize, workers’ rights, installing prevailing wage protections, defending the Family and Medical Leave Act, teaching labor education in the schools, creating fairer tax codes which close corporate loopholes, preventing the outsourcing of public services and creating and retaining manufacturing jobs. He helped forge a broad coalition to fight back against egregious attacks on Wisconsin labor in 2011 and 2012. Some of his programs, including the Wisconsin Regional Training Partnership and Worker Centered Learning initiatives, have been used as national models for training and job creation.

He was a veteran, father and grandfather.

“Phil was the true definition of a fighting Machinist and labor activist,” said IAM International President Bob Martinez. “Whether he was leading fights against anti-union elected officials, anti-union legislation, or bad trade deals, Phil was a leader in defeating reckless and radical anti-union agendas. Phil was dedicated to improving the lives of Wisconsin’s working families. Phil’s contributions to the labor movement are immeasurable. I want to personally thank him for his many years of service to the Machinists Union.  Our thoughts and prayers are with his family and friends.”

“Phil Neuenfeldt was great man, dynamic leader and brother,” said IAM District 10 Directing Business Representative Alex Hoekstra. “He was a giant in the world of labor who never sat out a battle on behalf of workers. The personal loss of such an important mentor and friend is nothing short of heartbreaking.  His spirit and insight will be missed but the legacy of a true working class hero will live forever.”

“It is a sad day for Wisconsin,” said IAM District 66 Directing Business Representative Neil Kamrowski. “I am at a loss for words.  Phil dedicated his life to our cause.  He was a true Fighting Machinist. It breaks my heart to hear his life was cut short, but his work will live forever, and we must continue his work.”