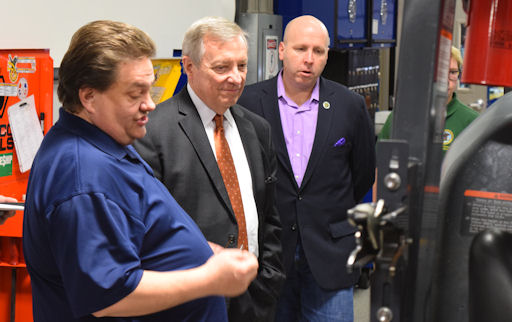 View photos of the event.

Durbin’s visit, along with Illinois State Senator Tom Cullerton (D), came as a result of a special invitation from Local 701 Directing Business Representative Sam Cicinelli, in hopes of providing these two friends of labor an opportunity to explore new ideas on moving the program forward.

The group – joined by IAM Midwest Territory Chief of Staff Steve Galloway, Lead Training Center Instructor Louie Longhi, and Local 701 Business Representatives Bill LePinske and Mark Grasseschi – started with a round table discussion about the challenges facing the auto mechanic industry, the extreme shortage of qualified technicians in the field and the lack of young people entering the trade.

“There is a real challenge facing our trade right now,” explained Cicinelli, “not only can we not fill the existing openings in our shops but we aren’t seeing enough young people entering the trade.”

Longhi and LePinske explained some of the issues facing young people wanting to get into the trade, including the fact that many local high schools have unfortunately cut their industrial arts and automotive programs all together. Plus, the soaring costs of for-profit technical training schools is making it harder and harder for young people to get into the industry. 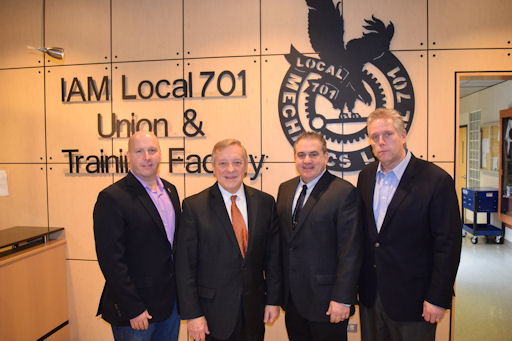 “Some of these kids are showing up in our shops buried with $30 to $40 thousand in debt after graduating from the for-profit trade schools only to find out that most employers will only hire them on at entry level positions,” said LePinske. “The wages they’re being hired on at are significantly lower than what they expected. Many of these kids get frustrated quickly and wind up leaving the industry.”

“The cost is a huge factor,” said Longhi. “But students in our program stand to save a lot of money with an estimated three year cost of only $950, as compared to the $30 thousand they would pay at a for-profit school.”

Longhi spoke at length about other advantages of attending the Local 701 Apprenticeship Program over for-profit trade schools, explaining that the Local 701 program works to place each student in a shop while they attend training so that they can actually practice what they are learning in the classroom.

Business Representative and GM Senior Master Technician Mark Grasseschi, formally a Chevrolet Technician at Phillips Chevrolet in Frankfort, IL explained the amount of training that technicians in the auto industry must go through every year just to stay current with all the fast-changing technologies.  “Over the years I have taken literally hundreds of classes with General Motors to stay current and maintain my Senior Master Technician Certification,” said Grasseschi.

After a lengthy discussion about the issues facing new workers, Sens. Durbin and Cullerton took a full tour of the training center where they had the opportunity to see some of the state-of-the-art equipment and facilities that Local 701 students use to learn. 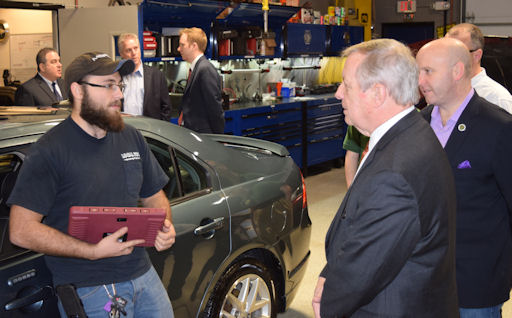 Training Center student Tim Richards talks to Sens. Durbin and Cullerton (D) about his experience at the training center.

Durbin took a few minutes to talk to current student Tim Richards, who is attending the program now while he works at Elgin Toyota. “I was going to school to become a law enforcement officer and decided I wanted to take a different path and get into automotive,” said Richards.

After the tour, Durbin and Cullerton stayed to have lunch and share their thoughts about the program and their ideas on moving forward.

“This is really a no brainer,” said Durbin, “everyone wins with your program, the students are getting a quality education for a fraction of the cost and employers are getting highly-trained technicians trained by professional mechanics.”

Sen. Durbin also explained an interesting fact about federal student loans: while only 25 percent of all federal student loans go to for-profit schools, they account for nearly a third of all student loan defaults. He sees programs like the Local 701 Apprenticeship Training Center as a potential way to help that situation, as well.

Durbin and Cullerton went on to share their ideas about getting returning veterans involved with the program and trying to get information out to more high school-aged students who are making career plans for after high school. They also expressed their interest in helping Local 701 gain access to potential grant monies that could be used to grow the program.

“Local 701’s apprenticeship program has set the bar for the Machinists Union and the Midwest Territory,” said Galloway. “Senator Durbin’s tour of the training center is a clear indication that Local 701 is on the forefront of satisfying the growing demand for qualified technicians in the Chicagoland area by having the union provide the necessary training needed to bring workers into their industry.”

For more information about the Local 701 Apprenticeship Training Center, visit their website at www.mech701.org.