The National Labor Relations Board Region 13 issued a significant complaint against the Al Piemonte Chevrolet dealership in East Dundee, IL on May 29, 2015. Nine Local 701 members have been on strike at this location for over 325 days and have been locked out by the employer since February of 2015 over issues related to obtaining a first contract and Unfair Labor Practices committed by the dealership. 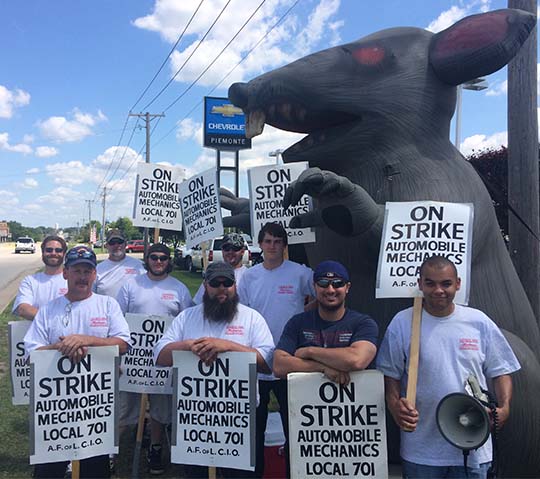 To summarize the complaint, as part of the remedy for the unfair labor practices alleged the NLRB General Counsel seeks an order requiring the dealership to reimburse our Local 701 members for all search-for-work and work-related expenses during the backpay period. In addition, the remedy includes (1) extending the certification year for an additional 3 months, (2) reimburse the Local for its costs and expenses incurred in collective bargaining from January 14, 2015 to the present, including attorney’s fees, reasonable salaries, travel expenses and per diems, (3) to meet and bargain with the Local at least once every four weeks, and (4) to read the notice to all employees in the presence of the representative of the NLRB General Counsel. The General Counsel further seeks all other relief as may be just and proper to remedy the unfair labor practices alleged.

These nine members voted unanimously to walk out on strike on July 9, 2014 after the employer failed to give them a fair contract offer and Piemonte management threatened their jobs. As it stands, this has been the longest strike in Local 701’s 84 year history of representing mechanics in the Chicagoland area.

Local 701 currently represents over 6,000 active members in over 560 locations in and throughout the Chicagoland area, including two other Piemonte locations, Al Piemonte Ford and Al Piemonte Nissan both in Melrose Park, Illinois. Local 701 has enjoyed many years of harmonious relationships with these other Union Piemonte locations and was hopeful to carry over this good relationship into their East Dundee Chevrolet location.