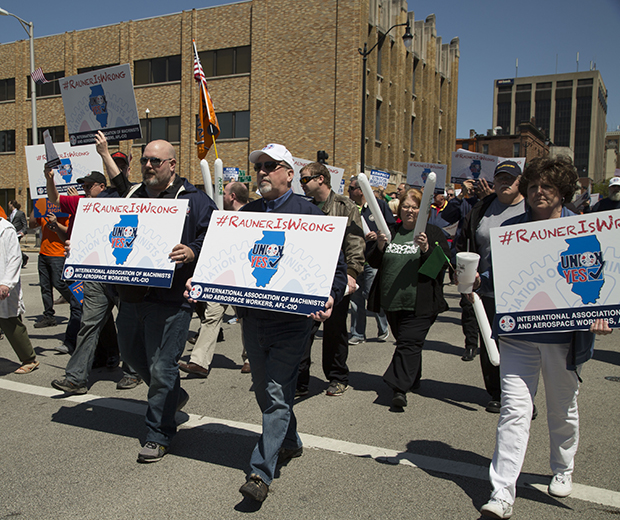 See photos from the #RaunerIsWrong march.

The march and rally, organized by the Illinois AFL-CIO and Illinois Working Together, was attended by more than 10,000 union members angry about the governor’s so-called “Turnaround Agenda” – a list of priorities he says must be approved by state lawmakers before he will sign a state budget.

Democratic lawmakers have rightfully refused to comply. With the governor not willing to work with Democrats to reach an agreement, Illinois has been without a state budget since July.

“Gov. Rauner has been holding this state hostage by refusing to pass a budget for almost a year. It’s unprecedented,” said Gruber. “He has essentially told the residents of this state, he won’t pass a budget until lawmakers agree to give him the heads of unions, state workers, the elderly, the young and the poor on a silver platter. His ultimate goal is to give more money to the wealthy, while curbing the rights and benefits of workers and cutting off education and essential programs in this state. We’re here to tell him ‘no.’”

With the state approaching a full year without a budget, working families in Illinois are already feeling the effects. Public colleges and universities statewide have announced layoffs, social service agencies are shutting down, construction projects have stalled, and businesses are owed billions for goods and services provided to the state. The state’s controller estimates the backlog could top $10 billion by the time the current fiscal year ends in July. That money will have to be made up in next year’s budget, which is technically due July 1.

“We’re here today to send an urgent message to Gov. Rauner,” said IL AFL-CIO President Michael Carrigan. “All of this devastation is due to one man, a mega-millionaire who thinks his huge wealth means he can impose his will on the entire state.”

“The ‘Turnaround Agenda’ would diminish wages, destroy worker protections, and completely wipe out what is left of the middle class here in Illinois,” said Chicago Federation of Labor President Jorge Ramirez. “Governor Rauner, we are calling on you to end the devastating crisis you created. It’s time to create an Illinois that works for all – for our students, seniors, state employees, tradesmen and women, and all workers struggling to provide for their families.”

See photos from the #RaunerIsWrong march.