The tour started at Local 873 in Horicon, WI, where Martinez and Gruber had lunch with district and local leadership, the executive board and stewards. From there they headed to the shop floor where they walked the floor meeting and talking with members and getting a first-hand look at the premium tractors and Gators that only IAM members can make. 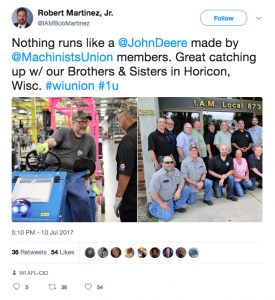 John Deere is home to more than 960 active IAM members.

The following day, the International President and General Vice President visited Local 1947 members who make marine engines and propellers at the Mercury Marine headquarters in Fon du Lac, WI. Martinez and Gruber toured the facility, walking and talking with members and stewards. They later joined members in the lunch room for a mid-day meal and an open dialogue about some of the members’ concerns and how the union’s new leadership can begin to move the membership forward.

Mercury Marine is home to more than 1,400 IAM members.

“IAM members are among the most highly-skilled, talented workers in the North American workforce. We are the best in our industries – bar none,” said Gruber. “The craftsmanship, passion and dedication that our members at John Deere and Mercury Marine put into their work gives a new meaning to ‘American 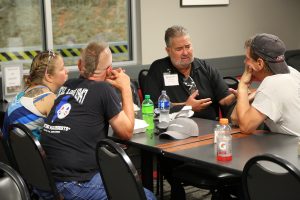 IAM International President Bob Martinez joined members of IAM Local 1947 in the Mercury Marine lunch room for a mid-day meal and an open dialogue about some of the members’ concerns and how the union’s new leadership can begin to move the membership forward.

made.’ Know that when you are buying these products, they’re not just American made – they’re union made. There’s a lot of hard work, pride and sweat behind each of those labels.

“Thank you to the leadership and members of IAM Locals 873 and 1947 and District 10 for your hospitality.”

“It was an honor to join International President Martinez and General Vice President Gruber touring John Deere and Mercury Marine and speaking with our members face-to-face,” said IAM District 10 Directing Business Representative Alex Hoekstra. “The skill and pride our members contribute to the products they build make them the very best in their respective industries. Hard work, solidarity and great leadership add up to a bright future for our members.”