IAM representatives testified at a Field hearing on TPP/Fast track in Richfield, MN. Witnesses testified about the anticipated impact of the TPP as far as we can tell considering the secrecy involved. 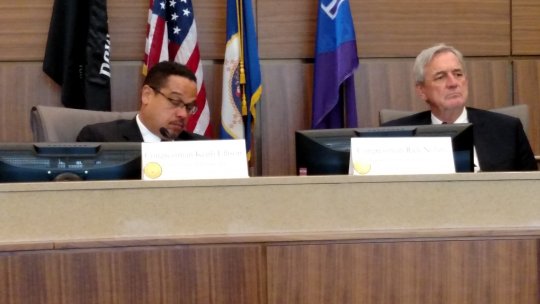 First I want to thank Congressman Ellison and Congressman Nolan for holding this hearing.

Once again we are faced with the question of whether or not to grant Fast Track authority to an Administration that has been negotiating a treaty, well more than a treaty, really negotiating a fundamental change in how nations and economies interact.

The Trans Pacific Partnership Agreement is not just about tariffs and trade, it will affect all sectors of our economy, our courts, patent protections, intellectual property rights, labor standards, environmental standards and more, done at the bidding of the world’s largest multi-national corporations, all for their gain and profit. This is an Agreement negotiated in secret, under Top Secret level security that, from what we have gleaned from leaked chapters, will further benefit the 0.1% at the expense of the 99.9% worldwide.

The Machinists Union is not against International Trade. We need and rely on Trade, what we want is Fair Trade, a level playing field. We can compete with any country when we are given a fair chance. The United States has the world’s best educated and most productive work force. If our trading partners would stop manipulating their currencies and stop allowing companies to poison their citizens, their air, their water, and our planet any competitive advantage they have would disappear.

We are told that this one will be different, that there will be enforceable standards for labor rights, for the environment, and for food safety. What in the history of every trade Agreement since NAFTA would make us believe that? Trust us they say. It’ll be good for the country they say. Well who are they? They are representatives of the biggest multi-national companies along with their trade association lobbyists. Whose interests are they looking out for, yours? Mine? The middle class? I think not.

So why “Fast Track”? The proponents of the TPP know that if the American people were aware of the details of this agreement it would go down in flames. By forcing Congress into an up or down vote and giving little time for debate or for members and their staff to even read it and to determine what TPP would mean for jobs and the economies in their States and Districts it is much more likely to pass.

The secrecy surrounding this agreement makes the IAM rightfully wary, we have seen firsthand the devastation previous trade agreements have wrought on our members and their communities as we Race to the Bottom in pursuit of cheaper labor, weaker worker protections, and non-existent or unenforced environmental protections.

So the question becomes: When is enough, enough? When will the American people say no more?