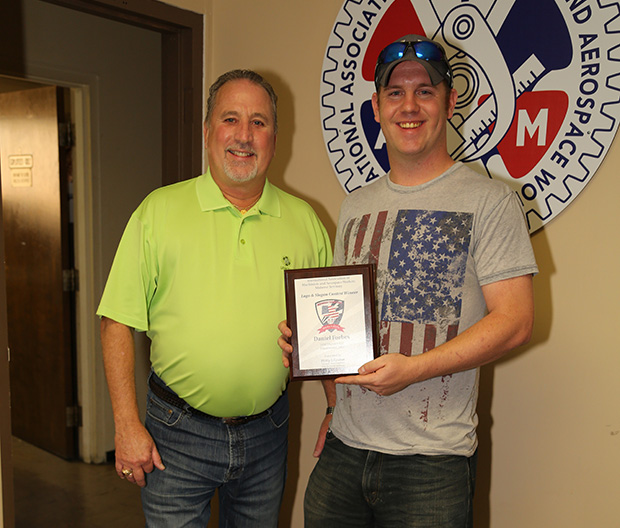 IAM Midwest Territory General Vice President Philip J. Gruber launched the contest in March 2016 in search of a logo and slogan that best incorporated the spirit of the territory’s 10 states, as well as the theme of moving forward as the territory works to organize and grow its membership.

“It was important to get the membership involved,” said Gruber. “After all, this new design is a representation of our entire territory. Their involvement throughout this process of branding our territory and future organizing efforts was vital.”

A panel of eight judges reviewed each submission and chose Forbes’ logo and slogan by an overwhelming majority.

Forbes, a nearly six-year IAM member and Local 837A Steward, works as an F-15 assembly mechanic at Boeing. The husband and father of two says he entered the contest because of his background in graphic design.

“I’ve done some t-shirt design and saw it as a great way to help out my union,” said Forbes. “It was just a fun project.”

Gruber met with Forbes to congratulate and thank him personally during a recent trip to IAM District 837 in Hazelwood, MO.

“On behalf of the IAM Midwest Territory, it is my pleasure to congratulate you on winning the IAM Midwest Territory Logo and Slogan Contest,” said Gruber while presenting Forbes with a plaque and $200 check. “Daniel, you should be extremely proud of yourself. Many judges remarked that they liked your choice of color and your use of the old logo in the newer version. They believe you are a ‘star in the making’ – and for that reason, I am proud to have your work represent this territory. Thank you, brother, for your hard work and dedication to this union.”

As home to the winning submission, Gruber also presented IAM District 837 Directing Business Representative Steve McDerman with a plaque, thanking him for his leadership.

As the new trademark of the IAM Midwest Territory, Forbes’ design will be displayed on the territory’s organizing materials, webpage, social media, printed materials, paraphernalia, and other branding opportunities moving forward. It will also be used to create a new territory pin.