The Winter 2018-2019 IAM Journal will be hitting the doorsteps on IAM members by early November. Here’s a first look at one of several articles in this edition. 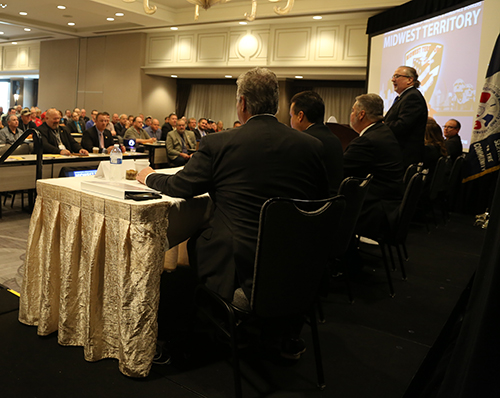 General Vice President Philip J. Gruber thanks members of the Midwest Territory for their hard word and tireless efforts in defeating Prop. A.

In these days of over-sensationalized media reporting, words like remarkable, miraculous and monumental are thrown around daily whether or not it accurately describes the situation. That’s not the case in Missouri where last August the voters of the state worked to overturn the corporate-backed agenda of their elected state legislators by defeating right-to-work by a 2-to-1 margin.

It’s nearly impossible to overstate the importance of this win for Missouri working families. Labor’s biggest state-wide win since the defeat of the anti-union SB5 in Ohio
in 2011 has energized activists and inspired workers across the country to attempt to overturn right-to-work laws in their own states.

Right-to-work was one of the first bills passed in 2017 by the Missouri State Legislature and signed into law despite protests at the Capitol by working people. Within hours, the Missouri AFL-CIO filed a referendum petition to freeze the law and put it on the ballot in 2018.

Just getting the referendum on the ballot was a momentous feat as opponents of the law needed signatures from registered voters totaling a minimum of five percent of the last gubernatorial election from at least two-thirds of the congressional districts. Working people of the state were up for the challenge as they turned in nearly three times the amount of required signatures with enough to qualify all eight of the state’s congressional districts.

All the hard work paid off on August 7, when Prop. A was defeated in 99 of Missouri’s 114 counties and the independent city of St. Louis. Working people of the state made their voices heard in the form of 937, 241 no votes and a 67.5 percent to 32.5 percent margin.

The IAM’s role in this historic victory for all of labor is almost as big as the story itself. The IAM donated over $1 million in resources to help overturn the anti-union legislation. The IAM’s Midwest Territory set the standard for other unions to follow. The Missouri AFL-CIO, led by Machinists Union member Mike Louis, was responsible for getting the issue on the ballot and the “We Are MO” campaign which unified union members across the state and turned them into activists, ultimately defeating the corporate-backed measure.

What’s more impressive than the referendum and defeat of right-to-work in Missouri are the people who worked tirelessly to make it happen. Here are just a few: 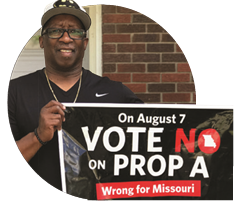 “August 7 was one of the best days for the State of Missouri,” said IAM Local 778 retiree Jerome Rogers. “That was one of the greatest things to happen in our state. It felt like we won the Super Bowl.”

Kansas City, MO resident Rogers retired from Honeywell Federal Manufacturing and Technologies after 35 years of employment. Just because he’s been retired for four years wasn’t going keep Rogers from getting involved in the right-to-work fight. And get involved is what he did.

“Sometimes it was sun-up to sundown,” said Rogers. “There would be times when I would call my wife at sundown and tell her not to expect me home until late at night because it was that important to us.” 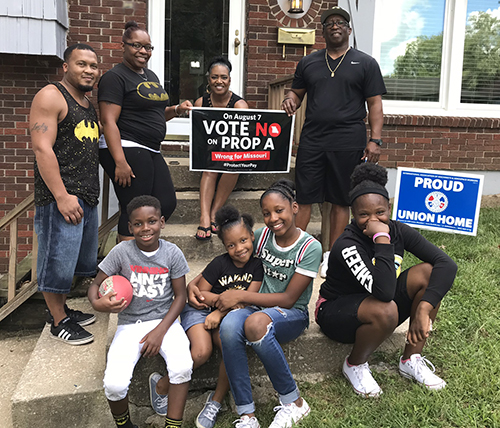 He used the communication skills he had honed as a union representative making phone calls and going door-to-door to talk to voters about how important it was to defeat Prop. A.

“I mostly knocked on doors and phone banked because a lot of people aren’t comfortable doing that,” said Rogers. “It wasn’t a problem for me, those were the two things I thought I could be most successful at.”

It would be easy for Rogers to sit back and enjoy the golden years of retirement he has deservingly earned, however that’s not what union members do.

“Being in a union is like being in a family, and you’ll do anything for your family,” said Rogers. “That’s why I put
so much into it, I know what this means for the future.”

When it comes to the future, Rogers has no plans of hanging up his union activist hat any time soon.

“I’ll always fight for working people because of what I’ve seen as a union rep,” said Rogers. “I’m going to stay on the battlefield as much as I can. I couldn’t walk away if I tried.” 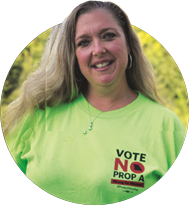 For IAM District 837/Local 387 member Deanna Draine, family was the motivator that pushed her to spend her free time educating voters on the dangers of Prop. A. Being union is in her blood and a family affair.

“I’ve pretty much been a union girl all my life,” said Draine. “I was raised union, my dad started out with McDonnel-Douglas, Boeing and now he’s at GKN. My husband is union as well.”

Draine is a bonding mechanic for GKN Aerospace where she has been employed for the past 16 years. Time is in high demand for the mother of three, so she had to do her best to discuss Prop. A with anyone who would listen and wear a “No on Prop. A” shirt everywhere she went.

“I did a lot of advertising with my shirts,” said Draine. “I used word of mouth with any friends, family, used Facebook, social media, emails and phone calls. Whatever I could to help. I put a ‘Vote No on Prop. A’ sign in my yard to show my support. I tried to do as much as I could, going door-to-door when I could.”

She volunteered her free time fighting right-to-work because she understands what it means for her children’s future.

“Our kids wouldn’t be able to get the good jobs we have now as union members,” said Draine. “Lord only knows what type of jobs they will have if unions went away. Probably have to work two or three jobs just to make ends meet.” 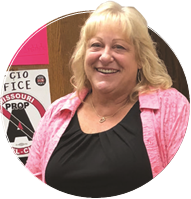 Michelle Windmiller has been an IAM member for 26 years. Although she lives in Godfrey, IL she felt obligated to be in the fight against Prop. A in Missouri.

“In my heart, it was an attack on unions,” said Windmiller. “It’s important we stand in solidarity, it doesn’t matter what state you’re in. It’s what Machinists do. We put boots on the ground wherever there is a fight.”

The IAM Local 660 Trustee spent the six months before the vote crisscrossing the state training union members how to educate others on Prop. A.

“We would teach them the messaging and how talk to their families, friends and neighbors,” said Windmiller. “With the numbers, we knew we couldn’t just rely on union members voting. To defeat Prop. A we needed a lot of support from non-union voters.”

Educating women on the fact that unions are the path to equal pay for women in the workplace was important to the single mother of two grown sons.

“I’m a proud IAM woman,” said Windmiller. “I know fairness and equality for women in the workplace isn’t something that is given, it’s been fought for.” 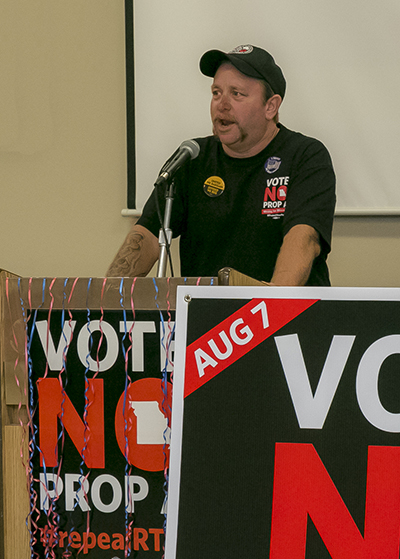 TCU-IAM Local 6762 Chairman Kelly Street kicks off the “No on Prop.A” watch party on election night in Kansas City;.

Working with union members from around the area from all different unions was inspiring and motivated her to work even harder to defeat Prop. A.

The stories of the people working to defeat Prop. A were inspiring as well. From the single mother who rode a bus with her teenage son to phone bank, to the International Alliance of Theatrical Stage Employees (IATSE) union member who volunteered 20 hours a week all while going through chemotherapy battling stage-four cancer.

“I’m so proud of those I have met along the way,” said Windmiller. “They come from all different unions and all walks of life. I wish everyone could feel just a little bit of what I got out of this campaign.”

“Every day I cross the Missouri River, I see the sign that says ‘Welcome to Missouri’ and it makes me so proud,” said Windmiller. “It’s great to be a part of a truly great moment for the labor movement. It is such a historic win for working people.”

Blueprint for the Future

The defeat of Prop. A in Missouri will go down in history as a huge win for the labor movement and all working people. Workers in the “Show Me State” are the direct recipients, however, it’s possible for the ripple effect to expand much farther than the states borders. Seven of the eight states that border Missouri are right-to-work and the people of Missouri just delivered a blueprint on how to change that. Stay tuned for further details.