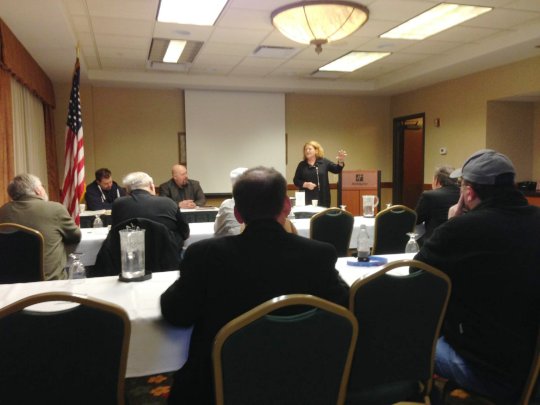 The Senator has been a friend of labor in North Dakota, but would not give the delegates in attendance a solid comittment to vote against the Trans-Pcific Partnership or TPP. The potential trade deal is yet another awful trade agreement and is opposed by organized labor.

Heitkamp talked about the TPP trade promotional authority that will be brought up this year. She stated that if she was asked that day (Saturday January 24, 2014) she would vote no. How she will vote when it counts is not clear.

She talked about her support for the Ex-Im Bank and the farm bill, which supports farmers and their ability to purchase equipment.

Also, she spoke about the growing populism of increasing the minimum wage and that although she believes it will ultimately be increased, she does not believe it will be to $10.10\hr.

A discussion took place about the moderates within the Republican Party having some common ground with Democrats vs. the extreme right-wing.