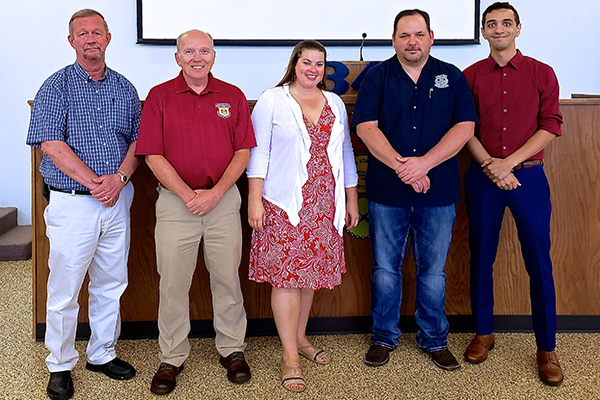 “This is what happens when we stand together in solidarity,” said IAM General Vice President Mark A. Blondin happily as he looked over the details of the latest contract coming out of the Machinists’ Southern Territory.

When the Remote Pilot Operators or RPOs working for CNI Federal Services at the FAA Center in Oklahoma approached the table, things didn’t go as planned.

“The company’s first offer was all takeaways; a decrease in wages, no benefit growth, cuts in shift differentials.  The whole thing was a disaster,” said Mark Love, Grand Lodge Representative in the Southern Territory. “But as our show of solidarity increased, so too did their offer.”

At the beginning of negotiations, the RPO group consisted of 48 out of 230 members in the bargaining unit. But that quickly changed.

“This group took the company on and quickly put out word as to what the company was offering. The next day, we had more than 80 new applications for membership.  The following day, it was even more.  By the end of negotiations, we went from 48 to 178 all armed and ready to work together for a great contract both now and in the future,” said Ben Moody, Business Representative of District 171.

Directing Business Representative and President of District 171 Rick Boardman proudly witnessed this committee make it happen for their Brothers and Sisters in terms of a good, solid IAM contract. “This is a very important win for the IAM and the labor movement as a whole because it solidifies the idea that by sticking together, we can change the dialect.  Our footprint at the FAA center is growing and with this latest contract it will let all employees there know that the Machinists can make a difference,” said Boardman.

This message and the committee’s persistence to educating the workers on the shop floor paid off.  After many more table meets, a brief cooling period and even an extension, the members of Local 850 should be proud of what their Machinists brethren were able to accomplish in the contract. The last, best and final offer included a nearly 10 percent yearly increase for Health & Welfare benefits, a 3 percent raise in wages, added premium pay during training and evaluating, more money for certain domains and even mandates quarterly steward meetings on the clock.  But one line item has the potential to change the future.

Moody explains.  “This contact gives stewards thirty minutes with each new employee to discuss Union membership.  To explain what we can offer and how far we have come in this contract journey.”

“And that’s just not something that comes with a price tag,” added Boardman with a smile.