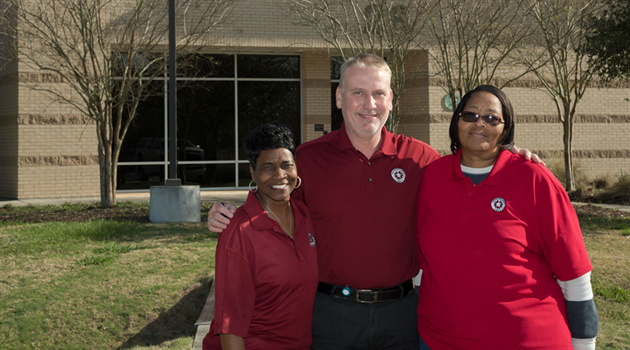 The following post, which highlights IAM District 37 members, originally appeared on NASA’s website. It is reposted here with NASA’s permission.

As the home of human space exploration, many people at NASA’s Johnson Space Center work to ensure astronauts safely and successfully explore space. Two buildings on-site and the staff within, however, are particularly focused on training and accommodating astronaut candidates before and after their spaceflight missions.

Buildings 26 and 27 were built more than seven years ago for astronaut training and housing at Johnson. Known as the Columbia Center, Building 26 is where astronauts carry out their physical training. It also holds all of the in-flight exercise hardware astronauts will use in space for fitness training. Mark Guilliams is a specialist for the Astronaut Strength, Condition and Rehabilitation (ASCR) Program, who has been working to help astronauts achieve their physical training requirements for more than 20 years.

ASCR specialists are assigned to individual astronauts, and they may work with an astronaut for years to prepare them for a mission. Astronauts assigned to Guilliams often become masters of the squat. Guilliams focuses on squat strength training because it helps protect an astronaut’s bones and lower back while in microgravity. The explorers also complete their preflight and postflight physical training requirements in the Columbia Center.

Astronaut crew quarters are in Building 27 for those returning from long-duration spaceflights. The facility includes all the amenities needed for crewmates to live comfortably, with a private, hotel-style room provided to each astronaut. In addition, the medical clinic coordinates with Methodist Orthopedics for astronaut injury rehabilitation and sports medicine. Astronauts tend to stay in Building 27 about a week after returning to Earth, but are able to stay for as many as 45 days.

Astronaut hopefuls stay in Building 27, too, during their interview process. Families of astronaut candidates are allowed to visit during that residence period.

The building will get increased traffic once the Commercial Crew Program is in full swing, as astronaut crews will be quarantined there for about a week prior to flight to ensure they stay safe and healthy before the mission.

Bill Bash, Joyce Rankin and Madia Haynes of Native Resource take care of operations to ensure that the astronaut residents can focus solely on mission training. Together, they maintain the functionality of the shared kitchen, laundry, computer and common rooms. While Bash joined the custodial team as a project manager in 2010, Rankin is a custodial supervisor who’s been at Johnson for more than 40 years. Haynes has also logged significant time, having been at the center for more than 20 years. This custodial team was recently designated to their particular responsibilities because of their excellent record performing other duties in Buildings 26 and 27.

Bash, Rankin and Haynes appreciate the opportunity to work directly with NASA’s astronauts and astronaut candidates, helping them feel at home before and after their missions. The astronauts, in turn, are grateful for this team’s unique work.

Bash, Rankin and Haynes embody the tireless dedication of many Johnson team members, showing that there are many employees with duties outside of the usual spotlight that keep the center’s human space exploration machine humming along so that NASA’s explorers can focus on the big things—like, our universe. It takes a village—and many teams—coming together to make our programs continuously successful.