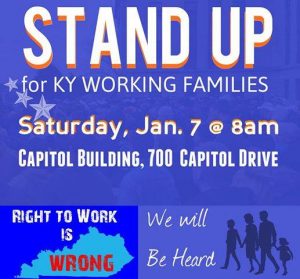 Kentucky Republicans have changed legislative rules to speed through anti-worker legislation, without public hearings or comments, under the guise of “emergency legislation.” In addition to repealing prevailing wage laws and eliminating paycheck deduction, Kentucky is now poised to become the 27th ‘Right-to-Work’ state in the nation. Of course, we know what these bills are really about: giving big businesses and corporations more power to squeeze worker paychecks.

Individually, these laws are very bad. Combined, they amount to a wholesale assault on the ability of Kentuckians to organize and bargain for better wages, benefits, and working conditions.  We encourager all TCU/IAM members that can make it to attend the rally tomorrow, Saturday, January 7th, at the Kentucky State Capitol Building.

Read the full story from the Kentucky AFL-CIO’s blog HERE. 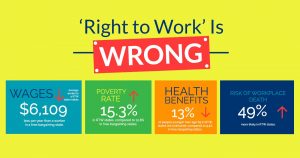