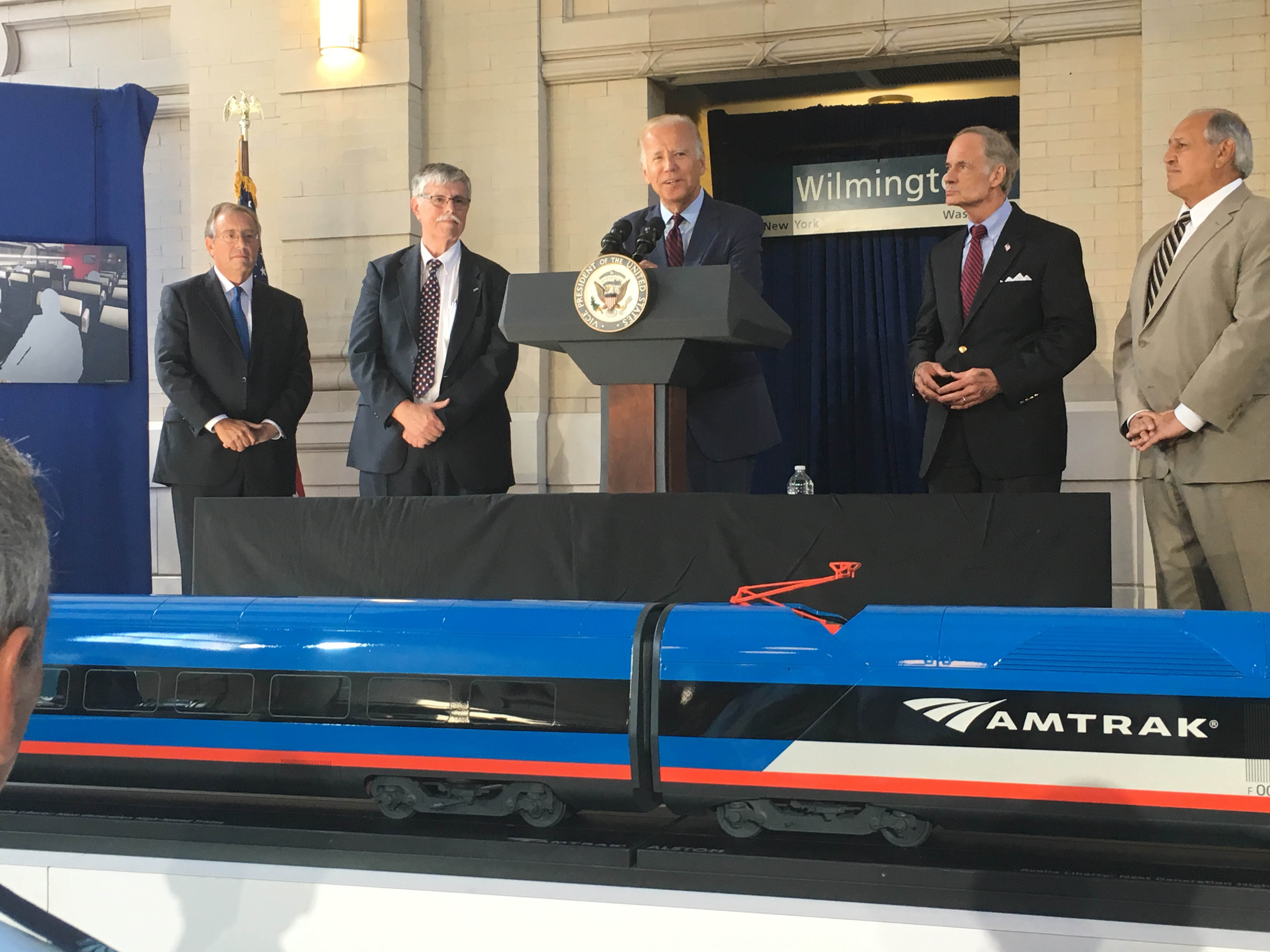 Wilmington, DE – Vice President Biden joined with Sens. Tom Carper (D-DE), Chris Coons (D-DE) and Amtrak officials in announcing a new $2.45 billion loan to purchase up to 28 brand new state-of-the-art locomotives, upgrade track and improve stations throughout the Northeast Corridor. In addition, the new trainsets will be built at the Alstom manufacturing facility in Hornell, New York, which will create 750 jobs for IAM members.

These new trainsets will travel at speeds up to 160 mph at first, but are capable of 186 mph once infrastructure improvements are made along the Northeast Corridor. The trains are expected to allow increased service of every 30 minutes between Washington DC and New York City, during peak times, with hourly service between New York and Boston.

Vice President Biden spoke briefly about the significance of the new trains, but mostly drove home messages about the importance of investing in Amtrak and passenger rail overall. Widely considered to be Amtrak’s #1 fan, the Vice President had nothing but great things to say about the railroad – especially its employees, who he likened to family on numerous occasions. Biden teared up while telling a brief story about an Amtrak station manager that wears a Beau Biden pin in honor of the Vice President’s son that tragically lost his battle with brain cancer:

I have made approximately 400 round trips, about 257 miles traveled per day, and these men and women have become my family…I started off years ago having Christmas parties for the key guys here {in Wilmington], and that got so big I ended up having the party at my home – because they’re my friends, they’re with me.

They’re the guys and women on the phone when things got bad. Even though I hadn’t been on the road every day, they were the guys that showed up at Beau’s funeral. They are the people who’ve been with me my whole career. The station master [here in Wilmington] wears a button, without my having known it, and has been wearing since Memorial Day last year, that says ‘Beau Biden’ on it. This is family.

And so, I just want to say that the reason why, in the tough times, that when Amtrak was really bereft of having the funds it needed just to keep things going, the extra mile that the employees have gone, the things they do. And [Sen. Carper] and I have seen it, every day we watch them.

[Addressing Amtrak employee in front row] You guys don’t have to pick up bags and carry them out, you’re not supposed to. But you do. You don’t have to do the things that I’ve watched many times…An older woman sitting there alone, you coming back with coffee for her or something to drink. It matters.

The Vice President also made sure to thank Amtrak employees for helping the railroad thrive during tough times: “The people we owe an enormous debt of gratitude to are the guys in the shops. Because of the shortsightedness of our government, the Congress, and Presidents, they held together a lot of these old cars with bailing wire…They did enormous amount of work to make sure the trains run on time, and we owe them.”

Earlier in the day, outgoing Amtrak President Joe Boardman spoke about the work they’ve done to turn the railroad around in his tenure. “In 2009, I said you can’t have good customer service if you don’t treat your employees well, and I think we’ve made those improvements,” said Boardman. Sen. Coons echoed those sentiments by specifically thanking the Amtrak employees for the work they do and for keeping us safe. He also noted that 1200 Amtrak employees either work or reside in Delaware.

Sen. Tom Carper reiterated that this investment is a down payment, and that there are many more investments needed in the future to fully realize the vision of these new high-speed trains.