Rail shippers to Congress: PSR, demurrage are killing us 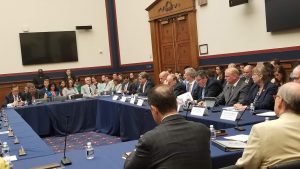 Last Thursday, the House Subcommittee on Railroads, Pipelines and Hazardous Materials held a roundtable discussion with various railroad customers to hear their concerns with recent business policy initiatives of the railroads, including Precision Scheduled Railroading (PSR) and increased demurrage rates. Many of the concerns raised by customers are similar to those expressed by TCU and IAM District Lodge 19 members.

Below are some highlighted quotes from the hearing. Click HERE to watch the hearing in full.

“I’m particularly interested in hearing from the shippers today, because I’m very concerned about the legacy of the now departed Hunter Harrison, and what he did to CSX with PSR, and what now is being adopted by Union Pacific. I have grave concerns.

I do not want the vultures on Wall Street destroying the precious asset that is rail transportation in the United States of America – the best, most efficient network that is the envy of most of the world. We shouldn’t let a bunch of jerks on Wall Street, who are just trying to increase short-term profitability, ruin it.”

“Over the past couple of years, many of our partner railroads have begun a journey. It’s titled Precision Scheduled Railroading, and it’s undermining some of the long-standing partnerships and relationships.

The challenges we face fall into three categories: we’ve got reduced service and unmet commitments on boxcar supply, increased rates, year over year – despite operational failures – have been significant; we’ve got significant increases in demurrage fees. We applaud the railroads own initiatives to make themselves more efficient, but we’re in our third year of this PSR journey, and many of the challenges remain…”

[referring to PSR] “…We were very keen on the objective, and that is to continue to improve and make it more efficient. But what you can’t do is divorce the process from the goal. The journey we’ve been on for the past 3+ years has been full of surprises, it’s a journey that’s been ambiguous and outright shocking sometimes – at either the amount or size of the surprises. For example, there were several weekends where – in my role – I was sitting wondering if I was going to have to shut down my facility in Georgetown, SC, because we couldn’t get rail capacity in there, and your inventories get so large that you run into safety issues….several of our facilities were either at the brink or actually did have to close [shutdown]…”

“..I’m here today to discuss a major and growing concern within my industry, and that’s the application of demurrage by Class 1 railroads, a topic exacerbated by the aggressive implementation of Precision Scheduled Railroading…Railroads are providing less service, charging more, and rejecting reasonable dispute resolution options…”

“…the NGFA recognizes the need for carriers to earn sufficient revenues to invest in their networks, cover capital costs, and to obtain reasonable profits, but PSR – for our sector – involves driving operating ratios (the costs actually spent running the railroad) to unsustainably low levels, just to impress Wall Street investors and shareholders, often at the expense of customer service.

Some have said: PSR means doing less, with less.

For our sector, PSR has increasingly resulted in arbitrary, abrupt and disruptive changes to operating plans and service schedules, often negating negating tens of millions of dollars in rail customers’ investments in their facilities, track space, and other infrastructure, that the railroads insisted that they make in order to continue to have rail service.

Crews and customer service personnel are also being slashed. And, there’s now little to no surge capacity in the industry to meeting upticks in demand for rail service.”

“I would say, ‘Precision Scheduled Railroading’ is anything but precise, at origin or destination.”

“…We have seen numerous delays recently due to insufficient locomotive power, incorrect configuration of power, faulty power, lack of crews, and ongoing poor communication between the railroads. The lack of locomotives means the trains cannot be loaded at the mines, and can end up sitting at our plant, at interchange, or at the mine for days.

PSR has also increased demurrage charges. These charges are supposed to incentivize shippers to do our part to minimize train delays, but do not do that in practice.

In April, we needed to send our cars to the shop for maintenance. Cars needed to be completely emptied at our plant before going to the shop. We asked UP to run our cars through the dumper a second time, and were willing to pay UP’s higher charge, but UP refused. The cars left our plant with carry-back coal – meaning we didn’t get some coal that we’d already paid for. UP had to haul more weight on a supposedly empty move, and AAPCO was at risk for additional charges from the repair shop for having the shop dispose of the coal.

The cars arrived at the shop and the shop told us they’d ready on April 26th. We arranged for the mine to load the cars at the end of April, and obtained a train slot from UP for that purpose. But, UP did not pick up our cars until May 7th – 11 days after they were available. 11 days. So our cars sat unused, the shop had to deal with storing them, and we had to deal with the mine for the loading time.

Under PSR, shippers face multiple fines or penalties for not handling a train properly when it arrives, but UP did not face any penalty or provide any compensation when our railcars sat. There is no reciprocity.

In other words, PSR lowers costs and operating ratios for the railroads, and increases returns for their stockholders, and bonuses for their management, but it means worse service, higher costs, and cost-shifting for customers.”

If PSR isn’t good for workers, customers, or safety, who is PSR good for? (Hint: Wall Street)