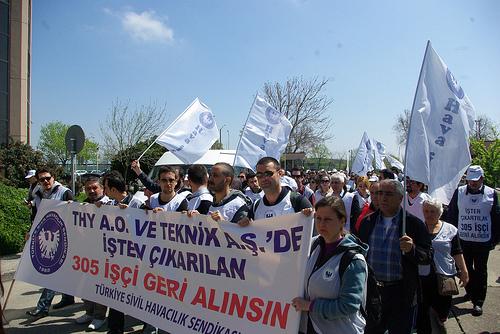 Turkish Airlines and Hava-Is, a Turkish affiliate of the International Transport Workers Federation (ITF), reached an agreement that will reinstate 305 terminated Turkish Airlines workers and end a 20-month dispute at the airline.

The 305 workers were terminated after taking action in May 2012 to protest legislation banning strikes in the Turkish aviation industry. Despite court rulings in favor of more than 170 of the Hava-Is members, the airline refused to reinstate any of the workers.

An ITF campaign was launched to support Hava-Is and “reinstate the 305”. In March 2013 the ITF, together with Hava-Is, lodged a complaint against the Turkish government at the International Labour Organization (ILO).

In June 2012 IAM General Vice President and ITF Executive Board Member Sito Pantoja and Chief of Staff and Vice-Chair of the ITF’s Civil Aviation Section Joseph Tiberi met with the Turkish ambassador to the United States on behalf of the Hava-Is workers to express concern regarding the attack on Turkish airline worker’s rights.

“Justice has finally been served,” said Pantoja. “I thank all IAM members and ITF affiliate members for supporting their Turkish sisters and brothers. It made a big difference.”

“We are delighted to see that a deal has been finally reached through proper negotiation between Turkish Airlines and our affiliate Hava-Is, showing that determination pays off,” said ITF Civil Aviation Section Secretary Gabriel Mocho. “It’s a fantastic outcome that we hope will help the Turkish government to repair its tarnished reputation.”

For more information about the “Reinstate the 305” campaign click here.