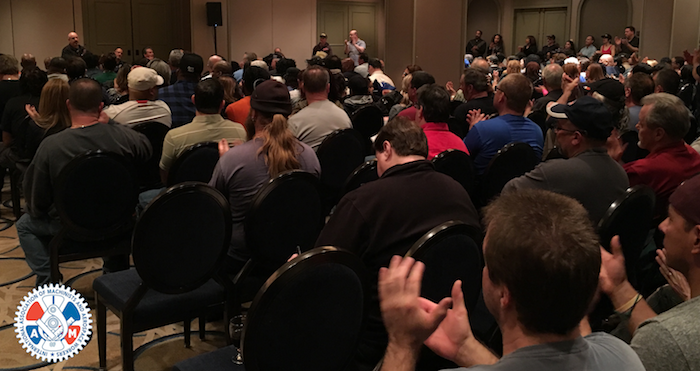 As negotiations go down to the wire, New Jersey Transit’s IAM and TCU members are busy preparing for a strike that will shut down the nation’s third largest commuter railroad at 12:01 am this Sunday, March 13th. In a tremendous show of inter-union solidarity, a Coalition of 13 unions representing 17 crafts are jointly negotiating with the carrier.

A private Coalition Strike Captain meeting was followed up by a meeting with the New Jersey Transit Police Department. IAM and TCU leadership then briefed the membership and detailed strike plans and finalized picket assignments. Behind the scenes, strike communication programs are being implemented and procedures to ensure strikers receive strike benefits have been confirmed.

The potential strike centers on NJT’s outright refusal to adopt the recommendations for settlement made by Presidential Emergency Board (PEB) 248, which President Barack Obama appointed last summer as a panel of independent neutrals to help settle the dispute.

PEB 249 was later established by the Obama Administration in November, 2015 and confirmed the Coalition’s proposal, which mirrored PEB 248’s recommendations, as the most reasonable settlement to the dispute.

Read the press clippings about the potential strike.