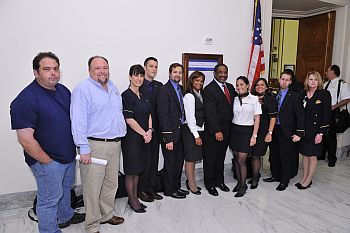 After two days of Congressional hearings into the proposed merger between United Airlines and Continental Airlines, many in Congress are questioning whether further airline consolidation is in the best interest of employees, passengers and taxpayers.

“United and Continental are repeating a strategic move that many airlines before them have made but that has brought sustained success to none,” said House Transportation and Infrastructure Committee Chairman James Oberstar (D-MN) who cautioned the airline’s executives that he would draft legislation to re-regulate the airline industry if the Department of Justice approved the United-Continental merger.

“Hardly a day passes where I don’t walk out on the (house) floor that someone asks me, ‘When are we going to re-regulate the airlines?’” said Oberstar after the first of three hearings on the proposed merger.

General Vice President Robert Roach, Jr., who was the only labor leader to be invited to speak at all three hearings, repeated in his testimony the IAM’s call for re-regulation.

“The Machinists Union opposed deregulation in the 1970’s and have been calling for re-regulation ever since,” said GVP Roach. “It is clear that airline deregulation has failed to deliver on its promises of a stable and profitable industry. The argument of industry instability that United and Continental are making to support their merger is the same argument for re-regulation, with a major distinction – more than 30 years of airline consolidation has proven that mergers have not helped the industry.”

“Some industries are too vital to our nation’s commerce to be allowed to regulate themselves,” added Roach. “One just needs to remember the billions of taxpayer dollars that went to bail out the financial industry and  millions of barrels of oil floating in the Gulf of Mexico to recognize that some industries are too essential to the United States’ economy to be left to their own destructive ways.”

The airline industry generates $1.4 trillion in economic activity and contributes $692 billion dollars per year to the U.S. Gross Domestic Product.