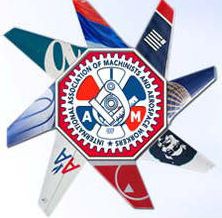 “A Continental/United combination must have what many past mergers failed to achieve: broad employee support. The Machinists will work closely with members of Congress and the Departments of Transportation and Justice to ensure that if a merger is approved, it will not be at the expense of workers at either carrier.

The IAM’s Transportation Merger Team has been evaluating a possible United-Continental pairing since United Airlines exited bankruptcy in 2006. Our concerns include the impact of such a merger on the pensions, benefits, seniority and job security of employees at both carriers. We are concerned about the survivability of the combined airline and the merger’s effects on passengers and the cities the airlines serve. As this process moves forward, these issues must be addressed to our members’ satisfaction.

With more than 26,000 Machinists Union members at both carriers, one way to avoid some of the mistakes of past airline mergers is to include the IAM very early in the process.”

The latest information about the announced United/Continental merger is available at www.goiam.org/mergers.

Click here for a PDF version of this story.