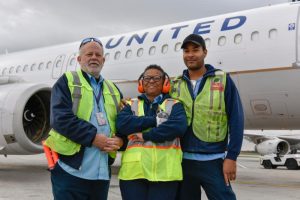 The International Association of Machinists and Aerospace Workers (IAM) today announced that approximately 28,000 IAM members at United Airlines this week will receive major and much deserved pay increases. Base wage rates will increase by an average of 19 percent and by 2021 will escalate by an average of 32 percent. Since 2014, IAM members at United have ratified 14 separate contracts that have increased wages for the vast majority of workers by approximately 40 percent, and by 2021 by about 55 percent.

“IAM members at United earned this raise because they are a major reason why the airline is again profitable and successful,” said General Vice President Sito Pantoja. “I commend our members at United for their resilience over the years and their solidarity in achieving the recent major gains in pay, pension benefits and job security.”

“I am proud of District 141 for providing the representation that our hardworking IAM members at United deserve,” continued Pantoja.

The IAM-United limited issue, expedited negotiations was one of the steps in a multi-airline strategy by the IAM to take advantage of favorable industry conditions to increase members’ wages, benefits and job security. An American Airlines Interim Wage agreement in July increased pay to industry-leading levels before negotiations are concluded. Negotiated contract language at Southwest Airlines provided $120 million in additional wages and lump sum payments mid-contract for IAM members at the airline.