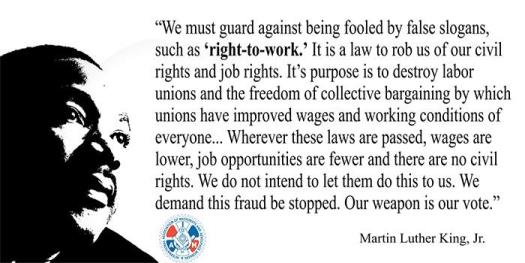 House Republicans introduced a bill Wednesday that would establish Right to Work policies nationwide, including the airline and rail sectors. Such a law would severely affect transportation workers in their fight for economic equality and it would increase the power of corporations over their employees. This law would impede transportation workers  to effectively negotiate fair contracts.

“If the Republicans get this legislation passed, we would not have the necessary resources to continue negotiating industry leading contracts,” said General Vice President Sito Pantoja. “Make no mistake, Right to Work is all about making sure the airlines recoup the gains the unions have made.”

Over the past year, the IAM has negotiated industry-leading wages and benefits at United and American, overwhelmingly ratified new deals on Hawaiian Airlines and have struck deals to improve the contracts at Southwest and Alaska.

“None of what IAM members achieved over the past year would have been possible under Right to Work,” continued Pantoja. “We must all come together and beat back this anti-worker legislation because our future and existence is at stake.”

The following is a short list of accomplishments negotiated through collective bargaining:

Some important facts about “Right to WorK”:

Find your Congressional Representatives and tell them not to support “Right to Work”.