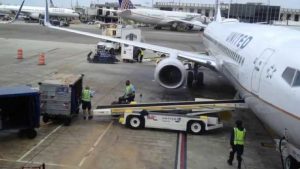 United Airlines last week settled a lawsuit brought by the Labor Department (DOL) over working conditions for its Ramp Service workers at New Jersey’s Newark Liberty Airport.  The agreement between the Occupational Safety and Health Administration (OSHA) and United Airlines will eliminate hazardous conditions that required workers to bend, twist, reach and lift in ways that caused injuries.

The lawsuit was triggered after an OSHA inspection discovered that United Ramp Service workers were exposed to numerous unsafe conditions that required them to work in unsafe ways. From 2011 to January 2015, IAM Local 914 Ramp members reported at least 622 musculoskeletal injuries.

IAM Newark Local 914, which represents about 3,000 United employees including 2,000 Ramp Service workers, worked with OSHA to identify workplace issues and to gather workers to testify in an August 2016 hearing.

“Local 914 president Bill Gula and our Newark members should be commended for their diligence in working with OSHA to report and rectify these issues,” said IAM General Vice President Sito Pantoja. “This settlement will help ensure that our ramp workers will operate in the safe environment necessary to do their jobs.”

Under the terms of the settlement, United Airlines also agreed to hire an expert to evaluate other potential injury risks at its Newark operation and to make recommendations for improvement.