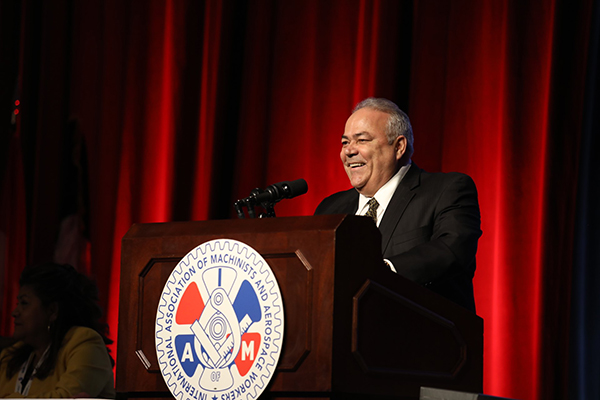 More than 800 members of the IAM’s largest territory, the Transportation Department, joined together in Las Vegas this week for the 2019 IAM Transportation Conference. The IAM, which represents more than 160,000 members in the airline and rail industries, is North America’s largest union in the sector.

PHOTOS: View a photo gallery on the IAM Facebook page

“This year’s Transportation Conference is the largest one ever,” said IAM Transportation General Vice President Sito Pantoja, a 42-year IAM member who began his career as an Air Frame and Powerplant Mechanic at TWA in New York. “We have over 800 delegates here and a lot to be thankful for over the last two years. But today I pledge that we must not rest until every working man and woman in our industries have the safety and security of an IAM contract. We need action and we need it now!”

The IAM and TCU-IAM have long set the standard for wages and benefits in the North American airline and rail industries.

“We should all be very proud that the IAM is the strongest voice for workers in the U.S. and Canada,” said IAM International President Robert Martinez Jr. “We will stand with you in every negotiation, every fight against privatization and every attack on our union. Together, we are the biggest and most powerful transportation union on Earth.”

“Working people are fed up with an economic and political system that doesn’t work for them,” said Trumka. “Workers are turning to each other. Every single day, more and more working people are realizing that the single best way they can improve their lives is to join a union. Brothers and Sisters, hear me loud and hear me clear: the Machinists are going to win a union at Delta Air Lines.”

On Monday, presidential candidates and Sens. Amy Klobuchar (D-MN) and Bernie Sanders (I-VT) made their pitches to delegates. Both pledged to restore power to unions and grow the middle class.