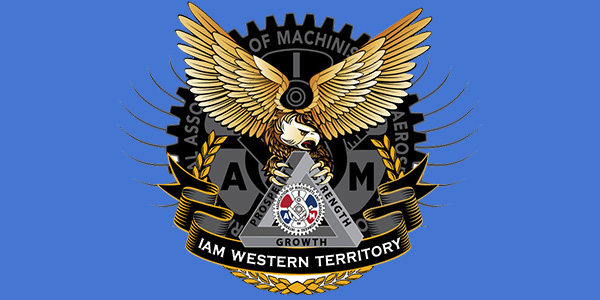 Brother Ryan Carrillo hired into CymStar LLC as an Electronic Technician at Ft. Irwin, CA and attended Kaplan University pursuing a bachelor’s degree in Business Management, later switching his major to Psychology-Human Studies. Carrillo became a member of IAM Local Lodge 25 in Barstow, CA where he served as a volunteer Organizer, Legislative Committee member, Shop Steward and Lead Negotiator.  At District Lodge 725 Carrillo served as an Apprentice Organizer, and in 2017 due to his organizing achievements Carrillo earned the “Western Territory’s Top Organizer of the Year Award”. In 2018 Carrillo was hired by General Vice President Gary Allen as an Associate Organizer for the Western Territory.

Brother Gary E Allen initiated into AFSCME Local 624 in 2005 while employed with the City of Albuquerque, NM. In 2006 Gary ran for his first elected office as a Local Lodge Recording Secretary and subsequently served in every elected position at his Local.  For several years he has worked as a public sector employee representative, negotiating several major improvements for Albuquerque workers including unprecedented wage increases, job, and benefit protections. He became a resilient voice in the New Mexico Labor movement after becoming involved in the State’s major Labor battles, including the fight to beat back right to work legislation three times and defending Labor from the anti-labor agenda of Governor Susana Martinez. Where he took a leadership role in mobilizing, equipping and organizing his Brothers and Sisters for the battles.

Brother Bob Simoni is a U. S. Navy Veteran who joined the IAM in 1990 with LL700 in Middletown, CT working for Pratt & Whitney jet engine test dept. In 2005 Bob moved to Las Vegas, NV where the opportunity to hire into Nellis AFB in 2009 working at the test cell, testing Pratt & Whitney military Jet engines for CSC.  Brother Simoni is a founding member of Local Lodge SC711 in Las Vegas, NV. During his time with LLSC711 Brother Bob held the position of local lodge President and also served his members as Chief Shop Steward at Nellis, AFB. Brother Bob also was Organizing Committee Chair, Legislative Committee Chair and a member of Negotiating Committee team for Nellis AFB.

“As we look toward the future of our great Union and the Western Territory, I have no doubt that all three incoming staff members will do great things,” said Western Territory General Vice President Gary Allen commenting on the new appointments.  “All three will play an integral role in continuing the tradition of organizing and stellar servicing in the Western Territory.”