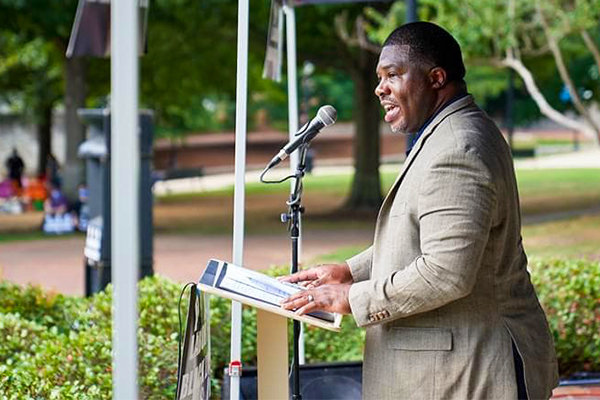 Williams, a long-time IAM labor leader in Texas, is the first Black president of the Texas State Council of Machinists. He is a well-known human rights activist.

Williams drew the historical line on injustices stretching from Emmett Till in the 1960s to the present day and George Floyd.

“The Machinists Union and the North Alabama Labor Council stands with you,” said Williams. “Our foundation of democracy has a long way to go to reflect the creed of this nation. We are seeing people of all races marching and speaking up, speaking out for a better today, a better tomorrow and for a better world, demanding that justice finally be done.”

“The Labor Movement has always been the great equalizer, allowing every working man and woman to have a voice and vote regardless of race, sex, religion or age,” said IAM Southern Territory General Vice President Rickey Wallace. “It’s the foundation of who we are and it directs our conscience as we fight for justice in the workplace and in our communities. By working together, standing in solidarity on the right side of history, we can and will change the world.”

Brother Williams and his wife traveled over 700 miles to speak at the rally.

Before the rally, the Valley Labor Report, on WVNN (Athens, AL) interviewed Williams. Jacob Morrison and David Story host the show live both on the radio and on the internet. It’s the only labor radio show in Alabama. Story is the President of Local 44 in Decatur, AL.

Watch the replay of the show.