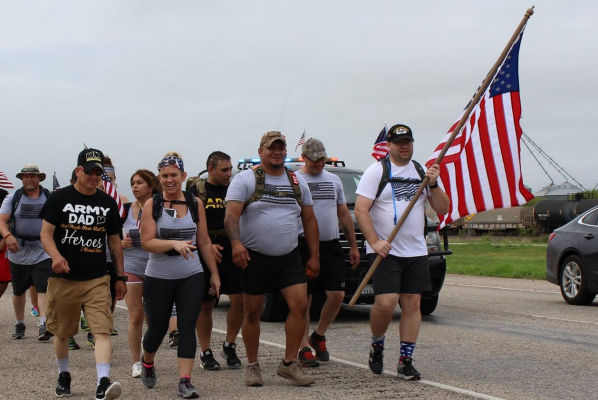 On a day when many Americans were heading out to go watch a parade or preparing for a family barbecue, IAM Local 2340 member Gume De La Rosa was preparing his team of supporters for a 22-mile road march from Riviera to Kingsville, TX, in honor of the military men and women who paid the ultimate sacrifice for our country. 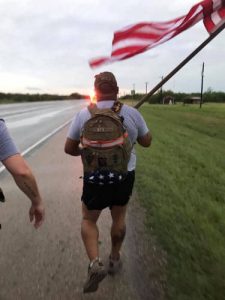 De La Rosa, an Army combat veteran, was joined by over 50 friends, family members and coworkers who wanted to show appreciation for our fallen military members, and also raise awareness to the average of 22 veterans lost each day to suicide. Some of the marchers carried a 22 lb. backpack – known as a ruck in the military – for the entire distance.

“I organized these ruck marches because we want to restore the true meaning of Memorial Day,” said De La Rosa. “It’s not about mattress sales, car shows and cookouts. We can do this ruck march and endure a little bit of pain for them. We walk because they cannot.”

The march, which included a Sheriff’s Department and EMS escort, was greeted by onlookers and supports along the 22-mile route, including two separate groups of students who cheered and waved flags as the marchers past their schools.

“It’s amazing to see our members organizing events like this to honor our fallen heroes and raise awareness for those struggling with PTSD,” said IAM Southern Territory General Vice President Mark Blondin. “What Gume has done here is a reminder to all of us of what Memorial Day is about, and inspires us to do more to help our nations’ veterans. I’m proud to have that inspiration as part of the Southern Territory.”

De La Rosa presenting Joe and Betty Lee with the flag carried during the march.

The march ended at the American Legion Post 99 in Kingsville, TX, where luncheon was held for the marchers. It was there that De La Rosa presented a local Gold Star family with the flag that was carried during the march. Joe and Betty Lee were given the flag in honor of their deceased Navy Veteran son, Joseph T. Lee. 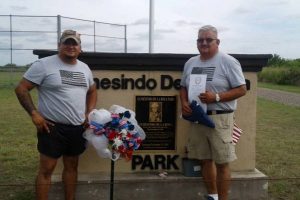 De La Rosa also surprised his family with a special presentation in honor of his uncle, Gumesindo. Each aunt and uncle was given a certificate from Texas Gov. Greg Abbot, and De La Rosa surprised his father, Ovidio, with a flag that was flown over the Texas State Capitol which the younger De La Rosa carried in his ruck during the entire march.

This is the fourth year De La Rosa marched, with this one being the largest. He plans to continue the tradition and grow even larger next year.