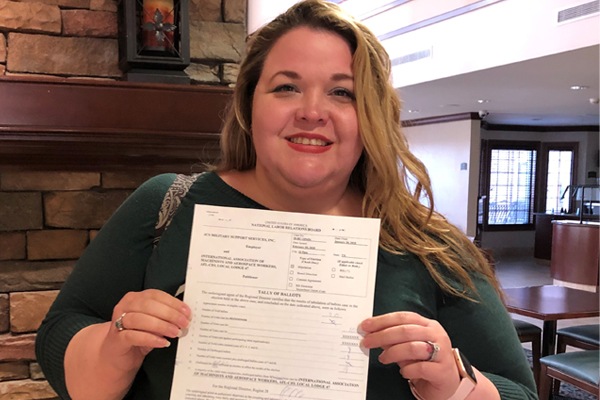 The Fort Bliss campaign got a boost last summer when the IAM Organizing Department added another Associate Organizer, Beatriz Guerrero, to the campaign. Working with the Western Territory and the IAM Healthcare Department, Guerrero took the lead and brought the unit to a successful vote. IAM Organizing Director Vinny Addeo has deployed two fulltime organizers to this national effort.

JCS, the company in charge of the MFLC’s at Bliss ran a revolting anti-union campaign that intensified as the election loomed closer. In a last ditch effort, the company threatened the mental health professionals, telling them neither JCS or any future contractor would hire them if they voted for the union.

Thanks to the work by Guerrero and her inoculation of the unit, the empty threats produced no fear in the MFLC’s. Instead, the MFLC’s were ready and the threats served only to strengthen the group due to Guerrero forewarning them of the exact threats and tactics the company would roll out.

“The IAM is honored and proud to be a part of the MFLC movement,” said IAM Western Territory General Vice President Gary R. Allen. “The crucial and honorable work these military therapists deliver to our service people and their families is the essence of humanity and compassion. Congratulations to the new MFLC’s and all the IAM staff that worked on this grueling campaign.”

“As always, patients are the No. 1 priority,” said IAM Healthcare Director Marti Garza. “As of now, over 300 MFLC’s are IAM members. These new members are on their way to ensure their patients are the first priority, not the company’s profits. Great job to all the MFLC’s involved in the organizing campaign and the entire MFLC organizing team, including IAM Organizing Director Vinny Addeo, Grand Lodge Representative Mark Ward, and Associate Organizers Beatriz Guerrero and Jason Roe.”