The Best Decision He Ever Made 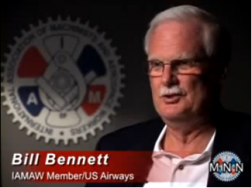 In ‘ It’s Worth It,’ a brand new IAM video, US Airways Maintenance Specialist Bill Bennett talks about his decision to join the IAM after his group twice voted “no” in elections held more than a decade ago.

Looking back, Bennett calls it the best decision he ever made, but admits he was among those who were initially concerned that union representation wasn’t necessary and that a union would dilute the good relationship he had with his employer.

“If I knew then what I know now, I would have raised my hand and said we need to do this the first time rather than waiting till the third time,” says Bennett. He also says that employees quickly discovered their individual relationship with company officials didn’t change.

Bennett describes the benefits of union representation for smaller classifications, particularly in an industry prone to perpetual instability. “We went through some tough times, including two bankruptcies and three mergers,” said Bennett. “If we didn’t have the union, especially through the bankruptcy, we probably wouldn’t have near as many folks working as we do now. I’m also sure we’d be working for half as much money as we make now.”

Click here to view the video and hear how one maintenance specialist went from an uncertain “no” vote to an enthusiastic “Yes!”