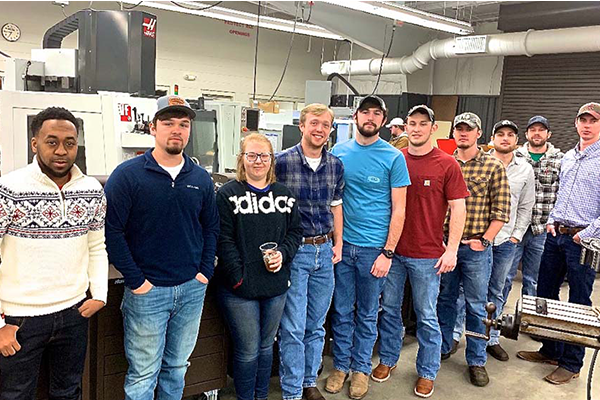 It was an idea that sparked a passion project at District 711 in Tennessee. A cutting-edge, IAM apprenticeship program for machinists that could be established in one part of the country and then replicated across the U.S.A. This month, that dream became a reality when an inaugural class of 10 students began their path to become Journeymen.

“15 years ago, the idea of creating a machinist apprentice program was exciting to everyone at District 711. Little did we know the extraordinary amount of hard work and dedication that would be needed to accomplish such a feat,” said IAM Southern Territory General Vice President Rickey Wallace. “To see this come to fruition is just outstanding.”

In a partnership with Northwest-Shoals Community College (NW-SCC) in Muscle Shoals, AL, the IAM has established its first apprentice program for students wanting to become certified machinists. Ten were chosen for this life-changing opportunity.

“We aren’t talking just about making a living wage here, we are talking about creating a future. About giving these young adults a career path that will change their lives, the lives of their families and possibly, even future generations,” said District 711 Directing Business Representative Jerry Benson.

In the end, these students will be licensed Machinists qualified for work on turbines, plant equipment and in nuclear facilities just to name a few, with starting salaries between $25 and $40 and more an hour.

District 711 Business Representative Keith McFarland has been spearheading this project since the beginning. He knows, firsthand, what a program like this truly means.

“My apprenticeship opened doors I had never dreamed of. It gave me a life that I didn’t believe was possible to achieve. But most of all, my training gave me pride to know that no matter the job, no matter the issue, I was armed with the information I needed to succeed,” explained McFarland. “That feeling is just indescribable.”

Benson laughs, “Keith was relentless, he just wouldn’t give up and I thank him for that.”

And it’s good no one did give up because already, the coals are in the fire to spread this program into other communities across the U.S.A.

“This is just the beginning,” said Benson happily as he explained what 711 has planned. “With the support of the IAM’s Executive Council, we are currently in talks with other colleges to create more programs specifically geared to the needs of the companies and contractors we currently work with.”

Wallace understands distinctly what this program means to the future.

“This is an opportunity to not just set the bar in apprentice programs, but build the bar,” clarifies Wallace. “To train the next generation and bring back the dignity of working with one’s hands.”