The Ladies of Coosa Pines

In 1999, the women of Coosa Pines Federal Credit Union (FCU) in Childersburg, AL knew there was a better option. Week after week, the papermill workers in town would cash their checks and talk about their union. They would explain it was their IAM contract that gave them wages and benefits which allowed them to take care of loved ones and be proud of the job they held. It didn’t take long for the credit union employees to see the advantages of being part of the Machinists Union.

“We didn’t get paid much back then, barely minimum wage,” said IAM member Janet Layton who was part of the initial bargaining agreement. “And the favoritism – we needed to even the playing field.”

But it wasn’t just as easy as signing up. For the women of Local Lodge 985 to become IAM members, they had to strike for their chance.

“The group went out on strike for three months to get that first contract, which says a lot about the strength of the women in Childersberg. The papermill workers wouldn’t cross the picket line and the people in town supported the cause,” explains Shari “Shay” Clardy, the current local lodge president. “It was rough, but they won.” 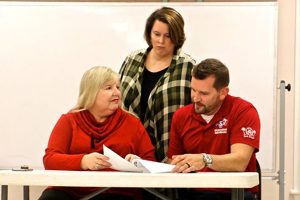 “This group is still 100 percent women and 100 percent union in Alabama. That speaks for itself – this is a tough group of Machinists! These ladies will always fight for what’s right, no matter the issue. Not just in their own backyards but for workers across Alabama, especially those in the financial industry who need someone like the IAM in their corner,” said District 75 Business Representative Matt Griggs.

Two decades later, that contract remains intact. But with negotiations coming later this year, Clardy wants to ensure a great future for the next generation of credit union workers.

But they will also try to strengthen the current agreement by improving the two-tier wage system and making sure work rules remain intact.

“It’s about educating the generation behind us. We need to make sure they realize what’s at stake. Coosa Pines FCU will be celebrating 75 years in 2020. So much has changed but it’s still one of the best jobs in this area because of the union,” said Clardy.

Southern Territory General Vice President Rickey Wallace has already given the green light for any resources this group may need to prepare for their time at the bargaining table.

“These days, being a Machinist member doesn’t mean you came out of a machine shop. It means you have a staunch belief that workers deserve a level playing field and dignity on the job. This group of members in Alabama epitomizes that idea,” said Wallace. “In 2020, the IAM is one of the most diversified unions in the world. Representing credit union employees in Alabama exemplifies that a good contract has boundless benefits for all workers, no matter the industry. I am very proud of this group of union women representing the IAMAW in the heart of Alabama.”

Clardy shares in that pride and is going to make sure this team in ready.

“When we first opened, you couldn’t do business here unless you or your family worked at the mill. Someone would come in and say ‘I am so-and-so’s grandson’ and we would ask how much they needed because we knew ‘PapPap’ would pay that back. Obviously, that’s no longer the case,” said Clardy with a quick laugh. “But we still have that connection to the community and that’s something this group will always cherish. We couldn’t say the same if so many of us didn’t dedicate our careers to this job. And we can do that because of our IAM contract.”