Tough Conversations in the South 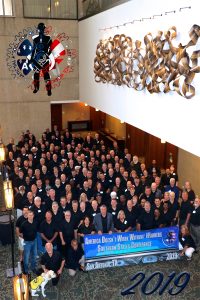 America Doesn’t Work Without Workers was the theme of the 2019 Southern States Conference of Machinists (SSCM) held recently in San Antonio, TX.  This concept resonated with the nearly 200 delegates from the IAM’s southern territory who gathered to talk about work, politics and everything in between.

“The SSCM is where the plan is put into action for the next two years on how best to help working families in our area.  This is our time to focus on what our message is and how we want to approach the challenges that lie ahead,” said SSCM President William “Benji” Sullivan.  “And we did that by talking about the desperate need to reshape the political debate happening across the south.”

Click here for photos from the Southern States Conference of Machinists.

“It’s time to change the conversation. We need to start talking about what truly matters to workers and their families, and how the political landscape affects our everyday lives,” said IAM’s Southern Territory General Vice President Rickey Wallace to a packed room full of delegates.  “And that’s not an easy discussion to have in the south.  But being complacent is no longer an option as bad political decisions continue to hurt our union family and the working class.”

Unacceptable trade deals, inadequate tax breaks, politicians who lobby instead of legislate – just a sampling of why IAM International President Robert Martinez Jr. spoke passionately to the group about the current political climate and the Machinists’ role in the upcoming elections.  He also explained why the IAM’s new presidential endorsement program was created and how this is part of the wave of change that needs to take place.

“The Machinists are back and we are bolder than ever,” said Martinez. “We are growing at a pace we haven’t seen in decades—and that means power. At the bargaining table, we are demanding the strong contracts our membership deserves.”

Created in 2010, the SSCM has always brought together state councils and delegates to promote the interests of working families in the south.  The work done in 2019 promises to bring forth candidates and reform that will help the hard-working men and women who not only built this country, but keep it humming each and every day.

“It can be an uphill battle in the south where many vote the same way they have voted for generations, without really examining what will help themselves and their families,” explains Sullivan.  “It’s our job to educate our union brothers and sisters about the issues and what’s at stake for this country.”

America Doesn’t Work Without Workers isn’t just a theme.  In the south, and across the U.S.A., it’s reality.