Trade Commission Report Shows TPP Will Be a Complete Disaster for U.S. Workers 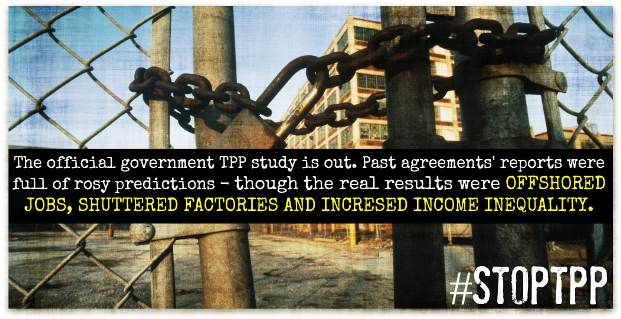 The International Trade Commission (ITC) on Wednesday issued its much anticipated report predicting the effects of the Trans-Pacific Partnership (TPP) on the U.S. economy, and its findings are damning for American workers.

“The ITC, which historically has overestimated the benefits of trade agreements, predicts that the TPP will increase our nation’s trade deficit in manufacturing,” said IAM International President Bob Martinez. “This means that the corporate driven, secretly negotiated TPP will lead to the export of good paying manufacturing jobs to countries like Vietnam that lack basic human rights. For ordinary Americans struggling to get by, this will result in more unemployment and continued downward pressure on wages and benefits.”

Read the IAM’s full reaction to ITC’s report on the TPP.

The congressionally-mandated report digs deep into TPP, and the results aren’t pretty.

It projects worsening trade balances in 16 of 25 U.S. economic sectors, including manufacturing, automotive, chemicals and others, finds Public Citizen’s Global Trade Watch. The overall U.S. trade deficit would balloon by an estimated $21.7 billion by 2032. “If ever implemented, the TPP could really be disastrous,” says Global Trade Watch Director Lori Wallach.

A Tufts University study, which used a model allowing for job loss and increasing income inequality, concluded the TPP would cost 448,000 U.S. jobs over the next decade.

“This ITC report is so damaging that any reasonable observer would have to wonder why the administration or Congress would spend even one day trying to turn this disastrous proposal into a reality,” said AFL-CIO President Richard Trumka.

TAKE ACTION: Tell your members of Congress to save U.S. jobs and reject the TPP