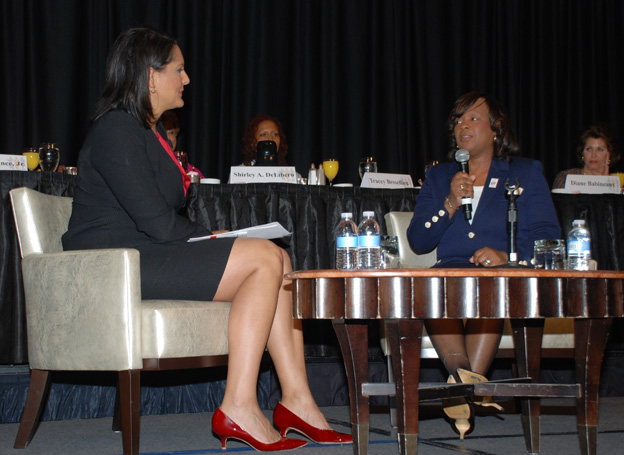 “Women Move the Nation” was the theme of the third annual awards ceremony hosted by the Conference of Minority Transportation Officials (COMTO) in Washington, DC.

In observance of Women’s History Month, COMTO honored 10 women who have made extraordinary contributions to the transportation industry.

Recipients of the 2014 “Women Who Move the Nation” awards represented a broad cross-section of transportation in both the private and public sectors – including aviation, highways, public transportation, advocacy and labor.

IAM General Vice President Diane Babineaux was among this year’s recipients. When asked by MSNBC Disrupt host Karen Finney what advice she would give to other women working to excel in a male-dominated industry such as labor, Babineaux stressed the importance of growth and mentorship.

“Always remember what you’re there for,” said Babineaux. “I don’t care what industry you’re in, as women we are always woven into certain pre-conceived conditions when we walk into a room. But good leaders know how to make things work and to adapt.”

“Being in a union that started out with 19 white men in Atlanta 125 years ago,” continued Babineaux, “there’s no sense being in a leadership role if you’re not going to try to mentor and bring other women along. Don’t always think yes I’m the first. Instead say yes I’m the first, but I don’t intend on being the last.”