Treasury Rejects Retiree Pension Cuts, But Fight Far From Over 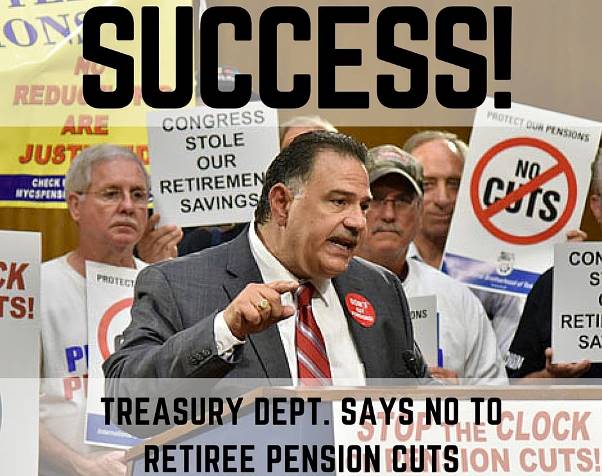 In its first ruling since a 2014 Republican-led Congress changed pension law, the U.S. Treasury Department refused to allow the Teamsters’ Central States Pension Fund to cut benefits to retired participants.

“This is an important victory for retirees, but the battle is far from over,” said IAM General Vice President Jim Conigliaro. “Cutting the benefits retirees have already earned is the wrong solution to the pension crisis. The IAM is going to keep up the fight to overturn the dangerous law Republicans passed behind our backs.”

In 2014, just days before the December holiday, congressional Republicans quietly passed the Multiemployer Pension Reform Act (MPRA), which permits pension cuts to current retirees in certain financially-troubled multiemployer pension plans. The legislation, which was brokered behind closed doors and slyly attached to a massive omnibus spending bill, took effect without the opportunity for hearings or public comment.

The Employee Retirement Income Security Act, or ERISA was enacted to protect retirees from pension benefits cuts, but the MPRA opened the door for mismanaged pension plans to dip into the pockets of retirees. Last week’s Treasury Department ruling protects retirees in the Central States Pension Plan, but does not prevent other multiemployer plans from attempting to cut benefits.

“The IAM National Pension Plan is well funded and our participants can look forward to a secure retirement, but this is bigger than just the IAM,” said Conigliaro. “The government has an obligation to protect the hundreds of thousands of workers who followed the rules and expect their pensions to be there throughout their retirements. We need to pass the Keep Our Pension Promises Act and make sure the that PBGC is properly funded.”

Tell your Senators and Representative to support the Keep Our Pension Promises Act (S.1631, H.R. 2844) and protect the livelihood of millions of retirees.

Click here for more information on KOPPA from the Pension Rights Center.